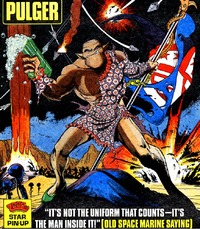 Pulger was first encountered in 'D.R. & Quinch Go Straight' (2000 AD progs 350 to 351). He was a veteran of the Ghoyogi slime jungle wars, which, according to D.R., "slightly affected his personality." In fact, he was prone to seeing Ghoyogian enemy combatants hiding under every bed and lurking behind every bush. D.R. and Quinch removed him and his equally paranoid friends from the 'Home for Distressed War Veterans' and installed them in 'Massacre House', an institution they had established for the rehabilitation "of dangerous maniac ex-servicemen in need of love and understanding." Coincidentally, Massacre House was next-door to the house of their enemy Judge Thorkwung, who was preparing to sentence them for a number of ghastly crimes.

Thoughtfully provided by the altruistic duo with guns, grenades and frag-mines, presumably intended for use in occupational therapy, Pulger and his friends spent many happy hours booby-trapping the grounds of Massacre House and doing a little mortar practice to keep their hands in. Thorkwung was less than impressed, but his attitude thawed when the mayor visited Massacre House, praised it as a noble charitable endeavour and heaped adulation on Thorkwung, to whom D.R. and Quinch ascribed total responsibility for the project. The grateful judge immediately used his phone to acquit D.R. and Quinch of all charges and delete their crimes from the computer system.

Unfortunately, it was just then that a delegation from the Ghoyogian embassy, invited to Massacre House by D.R. to promulgate peace and understanding, arrived. Pulger and his mentally disturbed brothers-in-arms responded to this 'sneak attack' with extreme hostility. The resulting carnage was blamed on Judge Thorkwung and re-ignited the war with Ghoyogi. Pulger was delighted, and wasted no time in enlisting for an eight-year tour of duty with his comrades.

When D.R. and Quinch joined the army ('D.R. & Quinch Get Drafted', 2000 AD progs 355 to 359) they ended up locked in a penal stockade on Ghoyogi with Pulger. They escaped via a snufflegruff tunnel but Pulger (dressed as a woman, a disguise he insisted was vital to his escape plan) had to fend off a monstrous slavering snufflegruff with a gun made of soap while D.R. and Quinch made a run for it.

He escaped the snufflegruff only to end up trapped between two opposing armies with D.R., Quinch and D.R.'s former girlfriend Crazy Chryssie. Luckily, Quinch's gigantic mother turned up to rescue them and they all flew away in her spaceship drinking tea and eating scones. Quinch's mother thought that Pulger was a young lady, but that was a small price to pay for safety — and the dress did look lovely on him.

Retrieved from "https://britishcomics.fandom.com/wiki/Pulger?oldid=60924"
Community content is available under CC-BY-SA unless otherwise noted.