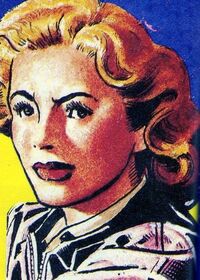 Professor Jocelyn Peabody is a character from Dan Dare. An expert on nutrition, botany, agriculture and geology, Professor Peabody (whose interests include skiing and netball) is Space Fleet's permanent Special Adviser to the Exploration and Research Department, and a trusted ally of Colonel Dan Dare, lending him invaluable assistance in his efforts to defeat the evil Mekon. She is attracted to men with square jaws, a good sense of humour and very unusual eyebrows.