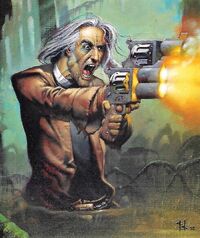 Preacher Cain is the protagonist of the Judge Dredd Megazine and 2000 AD series Missionary Man. He used to be a Senior Judge in Texas City, and was highly regarded by his colleagues because he was "borderline psychotic" and "a true natural-born killer."1 The decision was made to offer him a post on the city's ruling Council of Five when he tired of meting out 'justice' on the streets. However, after taking part in what became known as 'the Mutieville Massacre' when he was in charge of Justice Department's mutant resettlement programme, Cain resigned from his post, became a fundamentalist blood-and-thunder Christian, and took the Long Walk into the Cursed Earth. He later returned to Texas City to kill his former partner, Hollis, who had been his rookie and remained a proud mutant-hater.

Early days in the Cursed Earth

In his first appearance, Preacher Cain entered a Cursed Earth township called Dukesville whose inhabitants were, in his opinion, over-fond of the pleasures of the flesh. He described them as "lost sheep who must be returned to the fold," and went on to return them to the fold by destroying the entire town with a bomb concealed in a Bible, making its inhabitants not so much lost sheep as minced lamb. His later stories toned down the 'indiscriminate slaughter' aspect of Cain's personality (apart from one notable exception in New Orleans, detailed below), and this early episode could be explained as Cain having failed to shake off the 'all citizens are scum' viewpoint ingrained by his Justice Department conditioning. (Texas City Judges are so hardline that they make those of Mega-City One look lenient in comparison.)

In his second appearance, Cain acquired a deputy called Joe — a mutie whose diminutive stature, wizened features and pointed ears made him resemble a mythical goblin or dwarf. Cain met Joe hanging in a rope noose from a tree because a nearby town full of bigots had tried to lynch him for being ugly on a Sunday. Having cut down Joe, who was none the worse for his near-death experience, Cain rode into the town and killed eight people, some of whom had participated in the failed hanging and some of whom had tried to kill him first. (Unusually for Cain, the woman who ran at him with a meat cleaver had her legs kicked from under her but wasn't actually killed, possibly indicating that Cain has a dying ember of chivalry glowing fitfully in his blackened heart.) He then rode off on his horse with Joe by his side on a smaller mount. Whether or not the bigoted town's remaining 1,449 inhabitants subsequently changed their ways and started to treat mutants with respect and compassion is unrecorded.

A story published later but set in this period of Cain's life showed him teaming up with Judge Joseph Dredd in the Cursed Earth to apprehend some perps from Mega-City One who had gone on the run. Joe the mutant deputy was impressed by the "true grit" of his namesake, Joe the Mega-City Judge, but Cain was intensely disparaging about Dredd's ability to perform effectively in the Cursed Earth. This suggests that either Cain had absolutely no knowledge of Dredd's personal history, which includes several prolonged stays in and journeys across the Cursed Earth, or that he was scathing about Dredd's prowess in order to make himself look better in his deputy's eyes by comparison.

Following several adventures in the Cursed Earth, Cain became the sheriff of New Orleans, also known as 'the Big Sleazy', with Joe still as his deputy. He spent almost three years there before Texas City gained a new Deputy Chief Judge, a man named Wotan who decided that Cain was interfering with Texas City's plans for the region and knew too many of Justice Department's dirty secrets. Wotan sent a team of Judges to New Orleans to, as he put it, "rid me of this troublesome priest."2

Cain was also pursued by the agents of Mama Mojo, a swamp witch who wanted revenge because Cain had killed several of her murderous children. Mama Mojo's sons poisoned Cain with a drug that caused delusions, making him believe that she had stolen his soul and he would have to find her in the bayou to get it back. Although he had been gravely wounded by Texas City Judges (whom he had fought off with a scythe taken from a participant in the Mardi Gras fancy dress parade), Cain entered the bayou. His loyal deputy Joe tried to bring him back but was killed by the Undertaker, Cain's longstanding adversary, who was also part of the plot to get rid of Cain.

Mama Mojo strung Cain up from one of the trees in the bayou and left him there to die slowly. He was rescued by the ghost of Joe, who may or may not have been a hallucination, and by another of his deputies, Gideon Goode, who thought that Joe had led him to where Cain was hanging (not knowing that Joe was, by that point, already dead). After he and Goode killed a huge swamp monster, Cain became convinced that he had passed a test of faith set for him by God and therefore regained his soul. He killed Mama Mojo and all her remaining sons before destroying the dams that held the burning waters of the polluted Mississippi in check. The Mississippi swept through New Orleans and it was burnt to the ground, presumably killing not only the Texas City Judges garrisoned there but all of the citizens as well. This action could be explained by Cain's grief for his dead friend, the lingering effects of Mama Mojo's psychotropic drug in his system, or simply the fact that the "kill them all: God will know his own"3 part of Cain's philosophy had been apparent right from his début. Whatever the reason, is safe to say that by the time Cain's term as sheriff was over, New Orleans was completely free from crime.

The final part of Cain's revenge (Goode having disposed of the Undertaker in the bayou) was completed when he kidnapped Deputy Chief Judge Wotan from Texas City, took him out into the Cursed Earth, shot his kneecaps off and stood enjoying several cigars while Wotan was eaten alive by dog-vultures.

Cain threw his badge down beside Wotan's corpse and wandered off into the Cursed Earth. He was next seen killing a gang of mutant marauders to save a group of Helltrekkers, migrants from Texas City who had set off in their rad-wagons in search of a better life where they wouldn't be persecuted for their religious beliefs. The pilgrims were members of a cult led by the 'Prophet Joshua', an elder who had prophesied that they would find a 'Promised Land' on the other side of the Cursed Earth and that they would be led there by a 'Man of Stone'. Cain decided to be their guide, in the hope that he could save at least some of them from dying horribly in an environment for which they were totally unprepared, and the cult welcomed him as the 'Man of Stone' foretold by Joshua.

The pilgrims' first stop was at Americaville, a pre-Atomic War theme park which had been populated by non-mutated residents of the Cursed Earth and turned into what they thought was the quintessential American town. Cain soon discovered that the good folks of Americaville had enthusiastically adopted all the very worst practices from the USA's chequered history, including slavery. After rescuing a huge crowd of mutant slaves who had been put to work digging a new Grand Canyon for Americaville, Cain started wearing his badge again. (It had been found next to the remains of Wotan by one of the pilgrims' children.)

The pilgrims fought their way out of Americaville and were chased by its surviving inhabitants (all those who had not died when the pilgrims trampled a blockade with the huge dinosaurs pulling their rad-wagons, and knocked over a replica Statue of Liberty). To get rid of their pursuers, Cain made a deal with the Gila Bruja, a tribe of mutant saurian shamans: they would be given one child from every family in the convoy if they used their magic to kill the enraged citizens of Americaville. The Gila Bruja kept their side of the bargain, but Cain did not keep his. From then on the pilgrims were followed at a distance by the Gila Bruja, who wanted revenge.

The next problem the convoy had to overcome was a rad-plague, which killed six of them before Cain won a cure by entering a game of Russian roulette in the violent, gambling-obsessed city of Las Vegas. Further along their route they sheltered from a rad-storm in a military base which turned out to be hiding a hideous alien-human hybrid monster created before the Atomic War by Project Nephilim. Cain advised them to blow up the base so that the monster would be buried in its ruins, unable to escape. The dinosaurs pulling the pilgrimage's rad-wagons had died in the storm, so they had to tackle the Rockie Mountains on foot, in a blizzard.

On the verge of freezing to death, the travellers stumbled across what Cain called "a bio-dome refuge... a climate-controlled artificial eco-environment hidden away and forgotten for over a century." In other words, they had found their Promised Land, but so had the Gila Bruja who had been tracking them. Cain and the pilgrims fought a pitched battle with the shamans which only ended when Cain caused an avalanche that buried the Gila Bruja and sealed the pilgrims' haven away from the rest of the world.

The Place of the Dead

Joshua's cultists believed Cain to have perished in the avalanche, and wrote of his deeds with reverence in their sacred scriptures. Cain had, in fact, survived and returned to the Cursed Earth. He nearly died from radiation poisoning but was rescued and nursed back to health by a band of religious fanatics who guarded a nuclear missile in an underground silo, believing it to be the Biblical beast of the apocalypse. Discovering, to his horror, that the fanatics imprisoned all their mutated family members in the silo's deepest tunnel complex, Cain freed the mutants and left them to kill their former captors. In the fighting a stray bullet ignited the missile's fuel and it exploded, destroying the silo. Fortunately for Cain, who was only a mile or so away at the time, the missile's plutonium core had degraded so much that no nuclear reaction took place.

Cain was last seen in Teotihuacan, an ancient Aztec city buried deep in a jungle in Central America. It was now named Mictlan, or the Place of the Dead, and ruled by an ex-Judge from Ciudad Barranquilla who was called Kortez and believed that it was his destiny to be killed by Cain so he could ascend to godhood. This didn't stop him fighting Cain with a macuahuitl (obsidian-studded club) and putting out his left eye. Cain finally killed Kortez, ate his heart and declared himself the new ruler of Mictlan. He renamed it 'Redemption' and turned it into a sanctuary for "the lost and the dispossessed, the persecuted and the helpless, seeking a place of refuge from the terrors of the twenty-second century."4

Bringing law to the lawless, the godless and anyone who looks at him funny; electrical engineering; quoting from Milton's Paradise Lost; playing poker; making bombs out of spare parts; leadership skills.

Long leather coat; wide-brimmed hat; two bandoliers; a badge shaped like a five-pointed star that appears to be made of some high-tech artificial metal that can alter the words engraved on it (may bear the legend 'Cain', 'Outlands Marshal' or just 'Marshal'); cigarette lighter; box of matches; Bible.

Retrieved from "https://britishcomics.fandom.com/wiki/Preacher_Cain?oldid=91977"
Community content is available under CC-BY-SA unless otherwise noted.