Planet of the Damned was a science fiction adventure story by writer R.E. Wright (actually Pat Mills, and possibly later Alan Hebden) and artists Horacio Lalia, Alfonso Azpiri and Peña. It featured a group of castaways from the 20th century trapped on a hellish 'Ab-world' in another dimension when their TriStar jet flies through the Bermuda Triangle. The group (including writer Stan Hackmann and self-centred businessman Lew Kerr) are rescued from grotesque 'Ab-humans' upon their arrival by the time-lost bosun Jake Flint of the brig Gallantine (who was stranded there 150 years earlier). They place themselves under Flint's command as he spends the next few weeks trying to get them to safety in the aptly named 'Sanctuary'.

The strip was extremely violent and highly imaginative in the ways it devised to gradually kill off the members of the unfortunate group, including acid rain, a variety of fruit which cause anyone who eats it to literally drown in its juice, a group of Hell's Angels and an insane U-Boat captain still fighting World War II. The series debuted in Starlord #1 but only lasted until Starlord #10, when the survivors of Flint's band returned safely to Earth. The ending appeared somewhat rushed, leading to speculation that the strip was concluded prematurely.

From Starlord #1, by Horacio Lalia 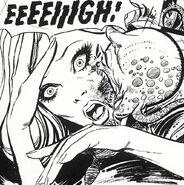 From Starlord #2, by Peña

From Starlord #6, by Peña
Add a photo to this gallery
Retrieved from "https://britishcomics.fandom.com/wiki/Planet_of_the_Damned?oldid=53213"
Community content is available under CC-BY-SA unless otherwise noted.