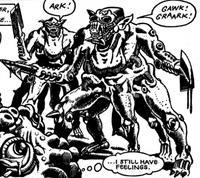 Characters from the 2000 AD strip Sláine, the multi-legged Orgots were one of several soldier groups bred and used by Cythrons such as Myraakothka. Cannibalistic, unintelligent and battle-ready, the Orgots were easy to command and tough to kill.

Sláine encountered numerous Orgots when battling Cyth invaders and later when travelling through the Tomb of Grimnismal alongside Myrddin and several others. While travelling through the tomb, Sláine's group rescued a busty foreign girl from being eaten alive by Orgots. They dubbed the girl Giya due to that being one of the only words she said.

Orgots are tough-skinned warriors skilled with swords, axes and other types of weaponry. They also enjoy pain.

They can use themselves as earth-movers or battering rams.

Orgot variations include the Type III and Type IV Battle Orgots and the Excavator Orgot, literally a giant hand with a mouth.

Retrieved from "https://britishcomics.fandom.com/wiki/Orgots?oldid=64840"
Community content is available under CC-BY-SA unless otherwise noted.