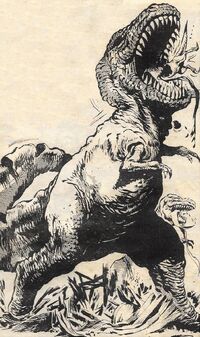 Old One Eye is a character from the 2000 AD strip Flesh. She was a huge Tyrannosaurus rex, aged 120 years, who wanted to kill all the humans who had used time travel to invade her territory and farm dinosaurs for their meat. Her arch enemy was the man who had put out her eye, Earl Reagan.

A different tyrannosaur bit Reagan's friend Joe Brontowski, causing him to develop a high fever. When he was lying close to death, Reagan cut a gland out of Old One Eye's neck (she was busy destroying Carver City, the colony ruled by the villainous Claw Carver, at the time), and a doctor used it to make a medicine that cured Joe.

Old One Eye later got revenge on the hated humans by attacking Trans-Time Base 3 and eating its Flesh Controller, who had foolishly tried to pick her up in the claws of a fleshdozer for which she was far too heavy.

If something approaches from her right side, she can't see it.

A version of Old One Eye from a parallel universe turned up in Mega-City One in the Judge Dredd story 'Helter Skelter' by Garth Ennis. This was caused by malfunctioning dimension warp technology. She spent a few happy hours eating Judges and Norts (from the 2000 AD strip Rogue Trooper) before popping out of existence again.

Old One Eye featured in a one-page humour strip in the 2000 AD 40th Anniversary Special which was written by Matt Smith and drawn by Rufus Dayglo. According to this strip, her actual name is Doris.

Retrieved from "https://britishcomics.fandom.com/wiki/Old_One_Eye?oldid=85836"
Community content is available under CC-BY-SA unless otherwise noted.