View source
watch 01:36
We're Getting Mutants in the MCU - The Loop
Do you like this video?
Play Sound

Oh, Wicked Wanda! was a satirical series by Frederic Mullally and Ron Embleton which ran in the adult magazine Penthouse from 1969-1980. Based around the adventures of would-be world conqueror Wanda Von Kreesus, her nymphomaniac girlfriend Candyfloss and her subordinates Dr. Homer Sapiens and the torturer J.Hoover Grud (who looked like a caveman but was secretly an intellectual), Oh Wicked Wanda! began as a series of illustrated text stories by Mullalley and Brian Forbes before becoming a full fledged comic strip. The strip was (predictably, for Penthouse) on the surface an erotic comedy, which frequently took swipes at its American 'counterpart', Playboy's Little Annie Fanny, but was in fact highly political, poking fun at famous and infamous public figures in often cruel (though subtle) ways (Richard Nixon was depicted as a machine gun toting gangster, while Ted Kennedy was forever standing in a puddle of water, a reference to the Chappaquiddick Bridge incident in which he drove into a river and his female companion Mary Jo Kopechne was killed). The strip also poked fun at popular comic strip characters such as Mickey Mouse, frequently portraying them as depraved degenerates.

There was a collected edition published in both Britain and America in 1975. 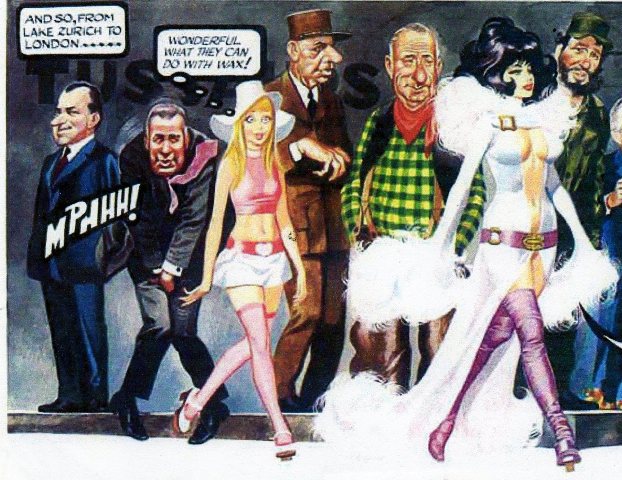