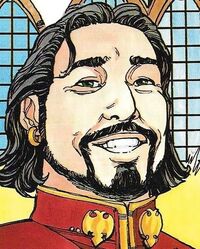 The eponymous protagonist of the 2000 AD strip Nikolai Dante was born in the 27th century, when a resurgent Russia had once more carved out an empire. Nikolai Dante is the illegitimate offspring (born of rape) of the pirate queen Katarina Dante and the aristocratic Dmitri Romanov, chief rival to Tsar Vladimir the Conqueror of the House of Makarov.

After spending much of his early life as a thief and con man, in 2666 AD Dante accidentally acquired a Romanov 'Weapons Crest', a piece of sentient alien technology originally intended for his half-brother Arkady Romanov. The Weapons Crest bonded with him in a symbiotic relationship, giving him certain superhuman abilities (the Weapons Crests were keyed to Romanov DNA and, once attached to a specific person, could not be removed).

Brought somewhat reluctantly into the fold by the Romanovs, Dante had a turbulent relationship with his half-siblings Konstantin, Andreas, Viktor, Nastasia, Lulu and Arkady (especially Konstantin, who resented him, and young Arkady, who hated him), complicated further by his love-hate relationship with Jena Makarov, daughter of the Tsar.

When war finally broke out between the two Houses, placing the lives of millions of ordinary citizens in jeopardy, Dante fought for the Romanovs. They were defeated and Dmitri was apparently killed, as were Andreas, Viktor and Nastasia, the only three Romanov siblings Dante actually liked (though Viktor later turned up alive). Dante returned to piracy alongside his mother but was soon forcibly recruited into the service of the Tsar. After witnessing a massacre carried out on the Tsar's orders, Dante tried to kill him and was jailed and tortured, but was rescued by Jena Makarov, who helped him raise an army of thieves and whores (including Spatchcock and Flintlock, from Dante's former unit) to fight a revolutionary war against her father.

Dante's rebels won, but their victory was cut short when Dmitri Romanov was revealed to have escaped death by possessing the body of his own youngest son, Arkady (presumably destroying Arkady's mind at the same time). Dmitri seized power, killing Dante's Weapons Crest, capturing Jena (whom he intended to force into marriage) and murdering many of Dante's allies. Betrayed by his brother Konstantin and sister Lulu, Dante was left to fight yet another war, this time to overthrow his own father, with the aid of his mother, his brother Viktor and the survivors of his old regiment, the Rudenshtein Irregulars.

Following a hard-won victory, Dante was on the point of marrying Jena Makarov and becoming Tsar of all the Russias when a final confrontation with Vladimir (who ultimately shot himself) resulted in him missing his own wedding. Whether Dante and Jena eventually married or if he returned to his life as an adventurer instead is unknown.

Fighting; stealing; thinking on his feet; a certain roguish charm.

Retrieved from "https://britishcomics.fandom.com/wiki/Nikolai_Dante?oldid=91422"
Community content is available under CC-BY-SA unless otherwise noted.