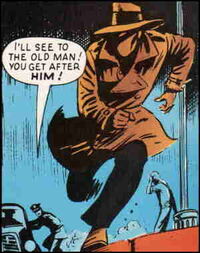 Night Raven was a Native American who operated as a masked vigilante in 1930s New York, his trademark being to kill criminals and then brand them on the forehead with his own unique brand, leaving a poem pinned to their corpses: "Where brooding Darkness spreads its evil wings, the Night Raven stings" (see notes). He was wanted by the police (who understandably considered him to be a dangerous psychopath) and was feared by the underworld, who had a permanent contract out on him (gang boss 'Mr Big' hired the individual known as 'The Assassin' to hunt him down, but he failed and was killed by Night Raven). He was occasionally assisted, however, by reporter Samuel Clement 'Scoop' Daly, who notably helped him dispose of Randall Croft, the villainous Death Master.

At some point after interfering in immortal crime lord Yi Yang's Dragon Tong's operations in 1931, Yi Yang dosed Night Raven with a potion which granted him immortality while nevertheless continually eating away at his body and mind, driving him mad and condemning him to eternal agony. In 1941 Scoop Daly acquired a cure for Night Raven's condition, but Yi Yang convinced him that opening the bottle would release a deadly plague virus so Scoop refused to hand the cure over to his old friend. When the now deranged Night Raven kidnapped Scoop's wife, Sadie, to try to force his cooperation, Scoop shot him and Night Raven fell into the East river and was swept away.

Unable to drown, Night Raven survived but rapidly lost his few remaining faculties and spent years as an amnesiac derelict until in 1965 a serial killer named Howard Bates, who had found his mask, began impersonating him and committing murders. Night Raven's memories were awakened by seeing his mask in the newspaper, and he tracked down and disposed of Bates before donning his mask again and tracking down Scoop Daly's widow. Scoop had realized before he died that the cure was not a plague virus, and so Sadie gave it to Raven. The cure could not restore his disfigured body or end his immortality, but it took away his pain. Night Raven has devoted much of his time in the next few decades to hunting down his equally immortal nemesis, Yi Yang, who is also now scarred on one side of her body after being caught in a nuclear explosion in Russia.

The Night Raven has a body mass index (BMI) of 15. One of the criteria for diagnosing anorexia is a BMI below 17.5.