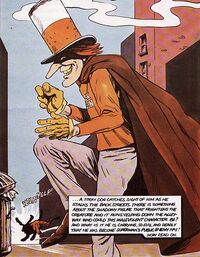 He first appears in the "AS 26" & "AS 30" comics. One of the covers to these short comics Superman flying into a cloud of cigarette smoke. He remarks on the fact that he needs to defeat Nick O' Teen before he covers the world in his toxic smoke. The second cover depicts him loosing his Enhanced Vision due to the smoke that blew in his face. In the end, Superman ends up crushing Nick O' Teen's cigarettes and telling the children that they should "never say yes to a cigarette." In the end, Nick O' Teen ends up being thrown into a vat of tar, but he survives.

Nick O' Teen next appears in a short comic that opens by describing him as a mysterious character. He appears in an alleyway, and the narrator describes his mysterious and ominous appearance. He causes a dog to run away yelping by just the sight of him. He soon finds a child standing on the side of the street waiting for his friend named Billy. Nick approaches him and offers him a cigarette.[2] Just before he takes it, his friend calls to him and he escapes. Nick overhears that they want to go to the playground, so he begins to head in that direction. He arrives on the spot to find twelve children, and immediately begins advertising his cigarettes. The children excitedly approach him, just as Superman picks up on Nick's presence. He quickly changes and heads off to confront him. Once he gets there, he punches him into the air, temporarily defeating him.[3]

In the first coupon, Superman is seen lifting Nick O' Teen into the air with one hand while he holds the villain's pack in the other. He desperately tries to grasp the pack, pleading for Superman to just let him have one. Superman says then talks about how it isn't easy to "just give up" cigarettes. [4]

In his next appearance, he is seen being flown away by Superman in the air. Superman talks to the audience about how much of a disaster Nick O' Teen is, the cigarettes that he smokes having caused much damage to both his organs and his teeth. It's part of the reason that he's so easy for Superman to defeat. [5]

In his next appearance, he appears to be having a fantasy about his next victim as Superman flies in to grab him from behind. The advertisement goes on to describe that more helpers are required to show the damages of cigarettes, and that more special content would be delivered with more support. [6]

In his forth appearance, he appeared to be being raised above Superman as Superman told the audience that he needed their help to fight the battle against Nick O' Teen.[7]

In his final coupon mini-comic appearance, the narrator describes that Superman is looking for him in Metropolis before he is able to get to any more children, but he is currently disguising himself. He disguises himself as "Barrel-Organ Man", a "Grey Stranger", and an "Old Magician". The comic ends with Superman again telling the audience to never say yes to a cigarette.[8]

Nick O' Teen appears in several anti-smoking advertisements. In his first appearance, he appears in a skating park with children skating around. He tells them that if they want to grow up fast, then they should take one of his cigarettes. Superman then shows up and throws him into the air, telling the kids that they shouldn't smoke. [9]

In his next appearance, he appears out of an alleyway and tells a group of kids to try one of his cigarettes. He adds that if they don't like it, it's easy to stop. Superman, who at the time was in a building, senses Nick and heads off in his direction. He arrives and picks up Nick, putting one of his packs in one hand and holding him in the other. As Nick pleads for just one, Superman crushes the pack, Nick collapsing on the ground while he coughs brown smoke. Superman makes an example out of him, telling the children that it isn't easy to quit.[10]

In his last appearance, the commercial begins with a man coming into Clark's office and telling him that there's a wizard preforming tricks with cigarettes. Superman doesn't like the sound of it, and so he arrives to find Nick in a wizard's outfit. He blows it off, and his true identity is revealed. He then throws him onto his vehicle's roof and tells the kids that they should smoke.[11]