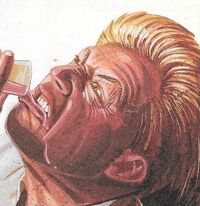 Rex Monday, known as Nervous Rex because he lived in a more or less permanent state of terror, is a character from the 2000 AD strip Sinister Dexter. He was the hypochondriac informant of gunsharks Finnigan Sinister and Ray Dexter, until he died at the hands of one of their foes. Which at least slightly validated his persistently pessimistic attitude.

Really, just being Rex was a weakness.

Too terrified to carry one.

'Rex mundi' is Latin for 'king of the world'.

Retrieved from "https://britishcomics.fandom.com/wiki/Nervous_Rex_Monday?oldid=87871"
Community content is available under CC-BY-SA unless otherwise noted.