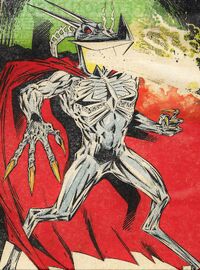 The eponymous protagonist of the cult 2000 AD strip Nemesis the Warlock was a follower of the god Khaos (also worshipped by Deadlock of the ABC Warriors), and a fire-breathing, demonic alien. He was apparently a revolutionary freedom fighter on a self-appointed mission to free the galaxy from the grip of the xenophobic human empire of Termight, ruled by the zealot Torquemada. He believed that his wife Chira and son Thoth were both killed by Terminators on the orders of Torquemada, although unknown to him Thoth had actually survived by casting an enchantment on the Terminator Sir Hargan.

Nemesis himself was far from being as noble and virtuous as his supporters believed. His longtime associate, the human Purity Brown, eventually realized he was actually little better than Torquemada, often treating his mission simply as an excuse for his own actions.

Nemesis fought Torquemada for years, reforming the legendary ABC Warriors to aid him. He got engaged to Magna, the warlock secretly responsible for betraying Chira and Thoth to the Terminators. Magna ate his familiar, Grobbendonk, while his back was turned. Then Purity turned up at Nemesis' wedding with news that Thoth might still be alive, and Magna was so shocked that she dropped her psychic guard for an instant. Nemesis read her mind, realised what she'd done and killed her, before setting off for Termight to find his son.

Thoth was angry at him for 'deserting' him and attacked the Blitzspear in Termight's white hole bypass, alerting the Tube Police to Nemesis' presence. The Tube Police trapped Nemesis with a barricade of 'laser bars', but he destroyed it by driving a school bus at it, killing all 200 children on board (including Torquemada's children Pandora and Barbarossa). When he got to Thoth's apartment Thoth made Satanus breathe fire at him and then vanished.

Nemesis lured Thoth out of hiding by rescuing Torquemada (actually an earlier version of him that Thoth had extracted from the time-stream) from the fate Thoth had imposed on him, of being burnt to death as an imposter again and again and again in a time-loop. When Nemesis confronted his son in the tubes below Termight, Thoth announced his intention to blow up the world. Nemesis offered to help, which was probably a ruse.

Thoth escaped into the Time Wastes and Nemesis went on a mission with Torquemada, Candida, Purity Brown and the ABC Warriors to find him. They ended up on Earth ten thousand million years in the future, when humanity had been extinct for millions of years, watching the sun, a red giant, set over a red sea.

Nemesis and Thoth were ultimately reconciled, but immediately afterwards Torquemada killed Thoth with a chainsword.

The warlock was eventually killed along with his arch-enemy, their essences melded together — along with that of the Blitzspear — and condemned to haunt the depths of space forever. (However, they were both later resurrected and promptly started fighting each other again, having apparently learnt absolutely nothing from their forced conjunction, and both still claiming to occupy the moral high ground.) Purity Brown became President of Termight, and renamed it Terra.

Magical powers of undetermined but great magnitude, including the power summon a mighty wind, the power to change his appearance, the power to make people fall in love, the power to wipe people's memories, the power to summon demons from the depth of his psyche, the creation of an 'ectoplasmic duplicate' of himself, hypnosis, telepathy, telekinesis, spitting acid, breathing fire and levitation.

Can survive unaided in the vacuum of space.

The Blitzspear (a semi-sentient living spacecraft called Seth, which means 'wild and dark one'); a hippogriff called Simurgh.

The sword sinister, Excessus (made from tcham, a dense star metal from the Nether Worlds' second sun, Sothus).

Nemesis apparently made a brief visit to Mega-City One in Garth Ennis's Judge Dredd story 'Helter Skelter', thanks to malfunctioning dimension warp technology. He wasn't seen by the reader, but a citizen claimed to have encountered him (see quotes).

Retrieved from "https://britishcomics.fandom.com/wiki/Nemesis_the_Warlock?oldid=115058"
Community content is available under CC-BY-SA unless otherwise noted.