Start a Wiki
Nelson B. Kreelman 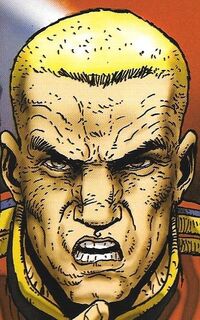 Nelson B. Kreelman, born in 2123 AD, was an evil and bigoted high-ranking politician in New Britain following the war of 2150 AD which wiped out 70% of the country's population. He was the mastermind behind the draconian laws which were brought in to persecute the country's large mutant population. Over two hundred thousand mutants died in Kreelman's death camps, and thousands more perished from starvation and disease in his mutant ghettoes. Unknown to most though, Kreelman had a dark secret: his own son, John, was secretly a mutant!

At the age of 17, after years of abuse from his father (including being locked in a cell for four years), John Kreelman joined the Mutant Army as Johnny Alpha and led an uprising which ended with Nelson removed from power and fleeing Earth in fear of his life. Nelson's wife committed suicide and his daughter Ruth disowned him.

Years later, Johnny Alpha (now a mutant bounty hunter, a 'Strontium Dog') was hired to hunt down Kreelman, and located his father on the isolated planet Stavros where he reduced him to begging for his life and then trapped him in a time loop, reliving his final moments of terror supposedly forever.

Unfortunately, two years later Kreelman was discovered and released by the unscrupulous Stix Brothers, the only mutants whose greed would cause them not to kill him on sight. With the Stix Brothers in tow, Kreelman took on the identity of Norman King and engineered his placement as the new head of the Search/Destroy Agency (after having former Director Harvey murdered by the Stix's), using his new position in an abortive attempt to get revenge on his son. Wearing a surprisingly convincing rubber mask, he based himself in the Doghouse. When the Strontium Dogs discovered the deception, the whole roomful of them turned on Kreelman and he was shot and killed.

So blinded by hatred that he started an unnecessary war, and ultimately lost it.

Retrieved from "https://britishcomics.fandom.com/wiki/Nelson_Bunker_Kreelman?oldid=140928"
Community content is available under CC-BY-SA unless otherwise noted.