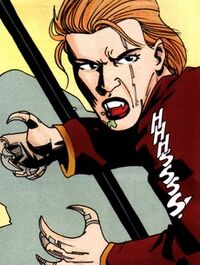 Nastasia Romanov is a character from the 2000 AD strip Nikolai Dante. She was one of the children of Dmitri Romanov and his sister Jocasta (don't ask) and, like most of her siblings, was thoroughly horrible. Vain, narcissistic, sexually predatory and with an unfortunate habit of murdering anyone who didn't think she was as beautiful as she did herself, or who had the misfortune to actually be better-looking than her, she also disliked her half brother Nikolai Dante, mostly because he failed to think she was wonderful. Nastasia was eventually killed by one of her other brothers, Konstantin Romanov, which really shouldn't have come as much of a surprise to anyone; they were a pretty dysfunctional family.

The alien Weapons Crest with which Nastasia was bonded gave her the fairly disgusting ability to transmute her bodily fluids into poisons or acid, which she could then spit at her victims, or deliver via her fangs or fingernails.

Presumably a martyr to indigestion.

Retrieved from "https://britishcomics.fandom.com/wiki/Nastasia_Romanov?oldid=91157"
Community content is available under CC-BY-SA unless otherwise noted.