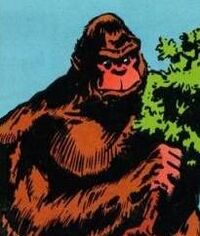 Mytek was a giant solar-powered robot gorilla created by Professor Arnold Boyce as retaliation after his lab in West Africa was destroyed by hostile tribesmen who, he learned, worshipped a giant gorilla of that name. Boyce believed Mytek would defend him and his associates from the tribe, the Akari, but his dwarf assistant Gogra stole it in order to use it to mould the Akari into a world conquering army. Boyce and gamekeeper Dick Mason managed to retake the robot (though Gogra escaped) and subsequently used it to fight off several more giant menaces, as well as thwarting more of Gogra's schemes. Eventually, Boyce installed a computer brain in Mytek which made him capable of learning and of independent thought.

According to one account (in the limited series Albion), Mytek eventually wound up deactivated in the vaults of a castle belonging to Cursitor Doom until, decades later, it was reactivated by Gogra and eventually commandeered by the Spider, who walked off into the Atlantic inside the ape after first stamping on Gogra, crushing him to death.

A more recent account (in the Smash Special in 2020) Mytek was eventually discovered buried in Nigeria and dug up by the government.

He's a giant robot gorilla. What do you think?

Mytek also appeared in the 2000 AD Action Special of 1992, in a story written by Si Spencer and drawn by Shaky Kane.

One of Mytek's victims was the scientist named Professor Fez.

Retrieved from "https://britishcomics.fandom.com/wiki/Mytek_the_Mighty?oldid=156420"
Community content is available under CC-BY-SA unless otherwise noted.