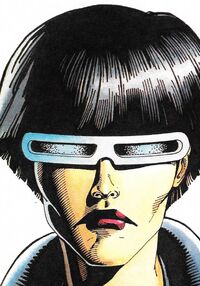 The protagonist of the 2000 AD strip Mother Earth is a super-powered time-traveller from 1955 (her original timeline's 1955 was a lot more advanced) who wants to use her godlike powers to murder individuals who her computer has identified as being either directly or indirectly responsible for the widespread pollution of the planet by her time period.

Mother Earth isn't human. She is a member of a species called Homo superior, whose ancestors she killed so that Homo sapiens would inherit the planet instead. (Never mind the ensuing paradox, i.e. if she murdered her own ancestors then why is she still here?) Unfortunately, Homo sapiens proves just as prone to planet-wide pollution as her species had been, so after her 43rd attempt at saving the planet by altering the timeline she decides to enlist some help. So she kidnaps three teenagers: Jo (a girl), Kris (a girl) and Dex (a boy).

Retrieved from "https://britishcomics.fandom.com/wiki/Mother_Earth?oldid=93831"
Community content is available under CC-BY-SA unless otherwise noted.