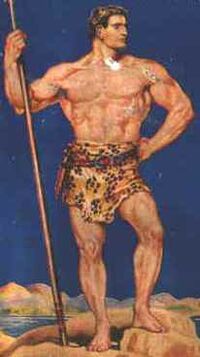 Morgyn the Mighty is reputed to be the world's strongest man. He first appeared as the sole survivor of a shipwreck (the schooner Hebrides) washed up on Black Island, where he battled some of the world's fiercest beasts to establish his supremacy. He later had numerous adventures around the world.

Retrieved from "https://britishcomics.fandom.com/wiki/Morgyn_the_Mighty?oldid=38850"
Community content is available under CC-BY-SA unless otherwise noted.