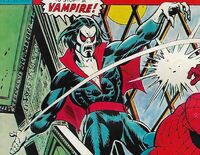 Dr. Michael Morbius was attempting to cure himself of a rare blood disease when he accidentally turned himself into a living vampire instead. Happens all the time! He has since veered back and forth from villain to anti-hero, often finding himself at odds with Spider-Man (Peter Parker).

Despite being a vampire, Morbius is not adversely affected by the sun or garlic.

He doesn't need it! He can fly!

He doesn't need them either! He's got teeth!

Most of Morbius's appearances in British comics were reprints of American material.

Retrieved from "https://britishcomics.fandom.com/wiki/Morbius?oldid=150589"
Community content is available under CC-BY-SA unless otherwise noted.