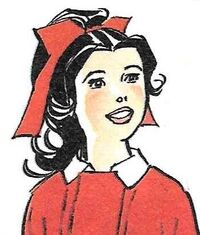 Little Molly Mason, who had only recently left school herself and looked even younger than she actually was, was inexplicably hired to be the Matron at Burleigh School for Boys, where she was in charge of fifty unruly boys not much younger than herself. On the face of it, this was a recipe for disaster, but fortunately Molly appeared to have been born with a mental age of forty-five and no concept of fun. In any case, this was a series that ran in Bunty, so no marijuana-fuelled nights of debauchery or unplanned pregnancies were in the offing.

Retrieved from "https://britishcomics.fandom.com/wiki/Molly_the_Matron?oldid=115082"
Community content is available under CC-BY-SA unless otherwise noted.