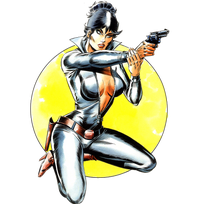 In 1945, a nameless girl escaped from a Displaced Person camp in Kalyros, Greece. Remembering nothing of her past, she wandered the world, across North Africa and the Middle East, learning to survive by her wits, befriended along the way by a wandering Jewish Hungarian scholar named Lob, who educated her and gave her a name: Modesty (later, she added Blaise, the name of Merlin's tutor from Arthurian legend). Lob died when Modesty was just 12 years old.

In 1953, Modesty took control of a criminal gang in Tangier and eventually expanded it into an international organisation, "The Network", acquiring a trusted right hand man, British born former French Foreign Legionnaire Willie Garvin, along the way (Willie and Modesty became inseparable, though their relationship was always totally platonic, both of them taking numerous lovers over the years). Eventually, Modesty obtained British nationality by marrying and then divorcing alcoholic Englishman James Turner.

The now rich Modesty, accompanied by the faithful Willie, retired to England, but the pair soon became bored by their new, idle lifestyle. After receiving a request for assistance from Sir Gerald Tarrant of the Secret Service, Modesty and Willie embarked on a new career as adventurers, sometimes acting as operatives of Her Majesty's Government, while at other times acting entirely on their own.

Proficient in most forms of unarmed combat

Various, including a Colt .32 revolver and a "kongo" (Yawara stick)

One of Modesty's most notorious moves was the "Nailer", in which she would distract an opponent by unexpectedly appearing topless, giving either herself or Willie a chance to incapacitate them.