Start a Wiki
Minnie the Minx 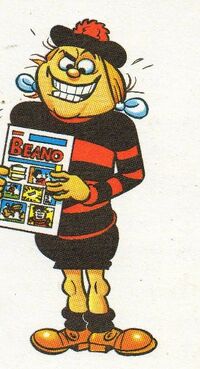 Minnie the Minx is a major character in the Beano and the seventh and last student of the seven pupils in Bash Street School's Class IA. She is a girl who likes to cause mischief.

Minnie the Minx made her debut on 19th December 1953 in issue #596 of the Beano, initially drawn by Leo Baxendale. Following Baxendale's departure from D.C. Thomson, Jim Petrie took over the strip in June 1961 and drew it until his retirement in January 2001, a total of 2,000 strips (only David Sutherland, on The Bash Street Kids, has drawn more individual strips). After Petrie retired, Tom Paterson took over as artist. In March 2008, he was replaced by Ken Harrison, who continues to draw the strip, though Laura Howell has also drawn it on occasion.

Minnie the Minx completed the triumvirate of terror begun by Dennis the Menace and Roger the Dodger, and is now one of the comic's longest running stars. She has a cat called Chester. Minnie's look has varied over the years, in particular her outfit which, while it normally resembles Dennis the Menace's traditional black and red gear (Minnie apparently fancies Dennis), has occasionally been shown as red and yellow or red and orange. On the cover of the 1965 Beano book, she appeared in a red and yellow jumper with a blue skirt, an appearance which she adopted for several months in 2007 to 2008, but she reverted to her original colours when Ken Harrison took over as artist.

Her father's name is apparently Victor (according to issue #2258) or possibly George (according to the Beano Videostars cartoons) but he and his wife are generally just referred to as 'Min's Mum' and 'Min's Dad'. Other notable characters in the strip include Soppy Susan and Fatty Fudge (who briefly had his own spin-off strip which parodied films — examples including Frankfurterstein, 20,000 Leeks under the sea and You only eat rice).

Causing havoc and being mischievous.

Retrieved from "https://britishcomics.fandom.com/wiki/Minnie_the_Minx?oldid=105831"
Community content is available under CC-BY-SA unless otherwise noted.