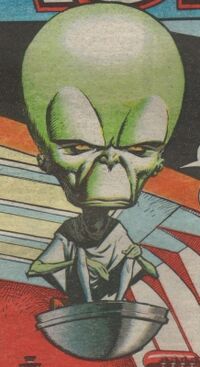 The Mekon is the genetically-engineered ruler of the Treens, a race apparently native to Northern Venus. Although his enlarged cranium makes him a genius, he has an atrophied, almost useless body. He is not the first Mekon, but is undoubtedly the longest-serving (having artificially slowed his own ageing processes) and is a cold, calculating despot obsessed with conquest. He claims to be without emotion but is also driven by a fierce hatred of Colonel Dan Dare.

The Mekon fought Dan Dare on a number of occasions, both as the ruler of the Treens and, after the Treens deposed him, on his own account — presumably it had become something of a hobby for him. These earlier battles were recorded in the pages of Eagle between 1950 and 1969. There have, however, been several conflicting versions of the Mekon's later life.

In one account (chronicled in the New Eagle), he escapes from imprisonment after a century to find that his old foe Dare has died in the meantime, but is drawn into conflict with Dare's great-great-grandson Daniel.

In another (chronicled in 2000 AD), also set decades after his original exploits, an older, apparently dying Mekon uses a revived but brainwashed Dare to aid him in restoring his power.

A further account (in Revolver) has the Mekon covertly taking control of Earth but ultimately being killed by an older, embittered Dare, who gives his own life to stop him.

In yet another possible future (as recounted in the Virgin Comics Dan Dare limited series), he attempts to conquer the solar system with the aid of a quisling British prime minister but is again beaten back by Dare, who comes out of retirement to stop him. And in an entirely different account (given in the Titan Comics limited series), he becomes President of Earth after brainwashing the populace, is overthrown by Dare, and takes up growing vegetables in a lunar prison!

It is probably the case that these are all separate, alternate universe versions of the Mekon.

Retrieved from "https://britishcomics.fandom.com/wiki/Mekon?oldid=125637"
Community content is available under CC-BY-SA unless otherwise noted.