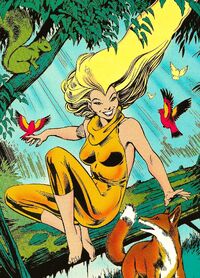 Meggan is a mutant shape-changer who was born into a family of travellers. Traumatised by the cruel taunts of people who did not understand her true nature, Meggan subconsciously gave herself a monstrous appearance and was kept hidden by her parents until she was an adult. As a result of this, Meggan grew up childlike, illiterate and totally naïve about the ways of the world.

Imprisoned in an internment camp at the age of seventeen when the reality-warping mutant Mad Jim Jaspers briefly conquered Britain, Meggan met another prisoner named Sue Parsons and they became friends. Meggan was later freed and ended up living rough until she encountered Brian Braddock, alias the superhero Captain Britain, who took her in and educated her.

While living at Braddock Manor, Meggan encountered the trans-dimensional mercenaries known as Technet. Their leader, Gatecrasher, tried to recruit her, but she turned them down because she was happy living with Brian and his sister Betsy.

Discovering the truth about her shape-shifting nature with the help of the telepath Alison Double, Meggan reshaped herself into a beautiful woman, in the process discovering her other elemental powers, and became the Captain's lover and soulmate.

Eventually, Meggan and Brian were married. Meggan has also served alongside Brian in the super team Excalibur and in the Government agency MI13, and has been known to aid the X-Men. She and Brian now have a daughter, Maggie, who has superhuman intelligence.

Meggan is a shape-changer and an empath, her physical form sometimes changing as she subconsciously reacts to others' views of her. She can also manipulate the elements.

Flight; ability to control earth, air, fire and water. She can also absorb and project energy.

Following the dissolution of Marvel UK, Meggan became a part of the American Marvel Universe. Her marriage to Brian Braddock occurred after this point, in the pages of the team book Excalibur.

Retrieved from "https://britishcomics.fandom.com/wiki/Meggan?oldid=117178"
Community content is available under CC-BY-SA unless otherwise noted.