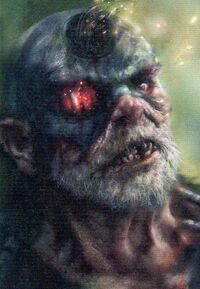 Mean was the shame of the Angel family. They were the meanest, toughest, viciousest, most durn tootin' bad outlaws in the Cursed Earth, every one of 'em a natural born killer, but Mean? To his Pa's despair, Mean was a sickly child who liked books and soft fluffy animals.

So to save the family name, Pa Angel got a doctor to 'improve' the thirteen-year-old Mean, replacing his right arm with a clawed hook and implanting a dial in his head which worked on his brain; on the lowest level, Mean would now be unpleasant, but on '4', he was an unstoppable, destructive force of nature. Mean was now the Mean Machine!

When the Angel Gang kidnapped the mutant known as the Judge Child, Mean was killed by Judge Dredd, who first blew off his arm (luckily, it was only his good arm) and then caused him to head-butt a fuel pump with explosive results (these events occurred during the so-called 'Judge Child Quest') .

Mean was resurrected years later by the Judge Child, and sent to seek vengeance on Dredd alongside his long-lost brother Fink. They failed, and Fink was killed, but Mean remained a thorn in Dredd's side for years. In his old age, Mega-City's surgeons finally managed to remove the dial from his brain and release him into the care of his son. Mean was now a sweet-tempered, easygoing man who liked helping people and playing with his pink toy bunny rabbit (with one arm, as his clawed left arm had been removed).

Gradually rehabilitated into society and given new mechanical arms, Mean settled into cosy domesticity with his son and worked happily in a scrapyard for a time. Then the Chaos bug unleashed in Mega-City One by the Sovs drove the citizenry insane, Mean included. Driven to violence for the first time in years, he eventually shook off the bug's effects, possibly due to his childhood in an irradiated plague-ridden wasteland having strengthened his immune system. Stricken with remorse for his actions, Mean left the city and returned to the Cursed Earth.

According to one account, Mean was subsequently captured by slavers led by Nevada Jack Freeman. The slavers ensured his cooperation by threatening to kill their other captives. Mean tricked them into following him to a buried arsenal with promises of the Angel Gang's legendary lost treasure. Arming the slaves, Mean led a successful revolt against their oppressors, but was mortally wounded by gunfire. However, it has been noted that Mean was no stranger to dying, and likewise no stranger to coming back...

Not that bright; occasionally descends into an uncontrollable head-butting frenzy.

Retrieved from "https://britishcomics.fandom.com/wiki/Mean_Angel?oldid=89576"
Community content is available under CC-BY-SA unless otherwise noted.