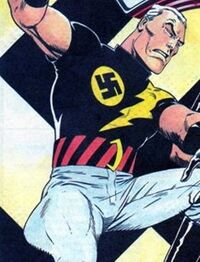 Masterman is a villain from the 2000 AD strip Zenith. He was a superhuman created by the Nazis during World War II using technology provided by the demonic extra-dimensional entities known as the 'Lloigor' or 'Many-Angled Ones', supposedly to help them win the war. However, the project's real purpose was to provide superhuman host bodies for the Lloigor themselves to aid in their conquest of humanity.

Masterman killed his British counterpart Maximan in 1944, but was caught in the blast of an atomic bomb in Berlin and destroyed. The Lloigor which had possessed him (Iok Sotot) returned to Overspace, but Masterman proved to be one of a pair of superhuman twins, the other of which was frozen until revived in the 1960s by the Order of the Black Sun, when Iok Sotot possessed that body in turn.

The new Masterman challenged the superheroes of that era including Peter St John, Ruby Fox and Red Dragon and killed Red Dragon before being killed himself by Zenith, who punched a hole in him.

Unfortunately, they discovered Masterman was nothing more than a shell being used as a host by Iok Sotot. The Lloigor went on to cause further havoc before its final defeat at the hands of St John, who had implanted a hypnotic command in Masterman which at the trigger words "Tyger, Tyger" shut down its mind.

Potentially, all those of the Lloigor within him.

Can by defeated by adroit use of telepathy.

Retrieved from "https://britishcomics.fandom.com/wiki/Masterman?oldid=107404"
Community content is available under CC-BY-SA unless otherwise noted.