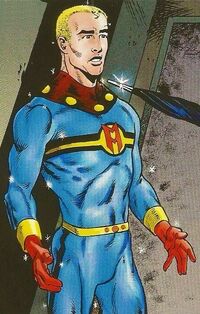 Micky Moran was a young orphan working as a copy boy for the Daily Bugle who was apparently given the power to 'tap into the key harmonic of the universe' by an alleged astrophysicist by the unlikely name of Guntag Barghelt (how an astrophysicist supposedly discovered this power remains unclear). Simply saying the word 'Kimota' (which is very nearly but not quite 'atomic' spelled backwards) would instantly transform the boy Micky into the adult superhero Marvelman. Borghelt (sometimes also spelled Borghelt, Barghelm or Borghelm), who was supposedly dying, claimed to be bestowing this power on Micky because he was 'honest, studious and good', and Micky duly used it to fight injustice as a superhero.

Before long, plucky Micky was joined by two others; Dicky Dauntless, alias Young Marvelman, and Johnny Bates, a.k.a. Kid Marvelman. Collectively, MM and his two junior partners were known as the Marvelman Family. They fought crime and tackled villains such as Young Nastyman and Dr. Emil Gargunza in the 1950s and early 1960s before disappearing.

Two decades later, a now adult Mike Moran (who had lost all memory of his time as Marvelman) became aware of his super-powered nature again, and discovered that he had lost his memory after being caught in a nuclear explosion which had killed Young Marvelman. First fighting and defeating an insane Johnny Bates (who had grown up with his powers intact and become a schizoid megalomaniac), Moran went looking for the truth about his past and discovered that his origins as he remembered them were a lie. His memories were false, implanted in him by a government agency called the Spookshow who had financed the experiments using captured alien technology created by the Qys. This technology had turned Moran and several others including Dauntless, Bates and a woman named Avril Lear into superhumans. They were all the children of deceased air force personnel.

Moran fought the deranged super-agent Big Ben, then confronted his own 'creator', Dr Emil Gargunza, who intended to use him and his wife to achieve immortality. Killing Gargunza, Moran tried to return to a normal life with his wife Liz and their newborn daughter Winter, but Winter proved to have inherited her father's powers and been born super-intelligent. Moran also had to contend with Bates again, and Bates murdered forty thousand people in London before Moran was able to execute him (assisted by Lear and by the alien Warpsmiths). Subsequently, Liz Moran left her husband, and Michael Moran elected to commit a form of suicide, submerging himself forever beneath his superheroic alter-ego's persona.

Aided by Lear and by alien races the Qys (who had pioneered the technology Gargunza had used to create him) and the Warpsmiths, Marvelman began reshaping the Earth into a Utopia with himself as its benevolent dictator. However, when he offered to give Liz a super-body so that she could be his equal, she turned him down and disappeared from his life forever. He eventually used Qys technology to resurrect Dauntless, but his former partner was also horrified at what he had done to the world.