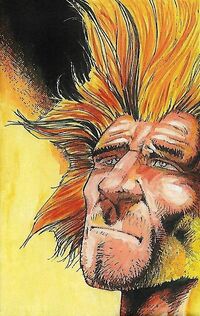 Marlon Shakespeare is a supporting character in the 2000 AD strip Judge Dredd, and sometimes appears in his own strip, Chopper. He first appeared in the story 'Unamerican Graffiti', where 'Chopper' was the identity he adopted as one of Mega-City One's disaffected youth, asserting his individuality through scrawling graffiti on the most inaccessible public buildings (his personal symbol was a smiley face). Beaten to the title of 'King Scrawler' by the rogue robot known as the Phantom, Marlon was arrested by Judge Dredd following the Phantom's destruction, and was jailed.

Years later, on probation, Marlon took up powerboarding, a sport which utilised flying surf boards, and became the Midnight Surfer, a contestant in the illegal contest Supersurf 7. Winning the contest, Chopper was arrested again, but this time was considered a hero by the populace of Mega-City One.

Three years later, Chopper escaped during a prison transfer in order to compete in the now legalized Supersurf 10, to be held in in Oz (the former Australia). Dredd tracked Chopper to Oz but allowed him to compete in the race for the honour of Mega-City One.

After narrowly losing to Oz surfer Jug McKenzie, Chopper escaped into the Radback. It is possible that Dredd, who secretly admired Chopper despite himself, allowed him to escape. Marlon spent months in the Radback, forming a close relationship with a girl named Charlene and eventually beating Jug McKenzie in a personal rematch, which left the pair as friends. After the death of his companion Smokie, an Aboriginal man with whom he had been living in the Radback, Chopper returned to civilisation to compete in the lethal Supersurf 11 in Mega-City Two. The contest had been turned into a death match by its sponsor, StigCorp, in order to revitalise the public's waning interest in powerboarding. Chopper was grievously wounded and passed out from blood loss inches before the finish line — but not before killing Stig, the CEO of StigCorp.

Against the odds, Chopper survived the devastating injuries he had sustained in Supersurf 11 and retired to a drop-out community in the Radback with Jug and Charlene. The community was then attacked by StigCorp, who wanted to avenge their CEO's death. Aided by Jug, Chopper took revenge on StigCorp with a near-suicidal assault on powerboards.

Years later, following Jug's death, Marlon was conned into returning to Mega-City One by Jug's estranged wife and daughter as part of an elaborate scam, but escaped again after another encounter with Judge Dredd and returned to Oz and his job as a lifeguard.

Expert powerboarder with a good head for heights. Good at catching sand biters (Radback snakes which can be eaten if you're hungry enough).

Retrieved from "https://britishcomics.fandom.com/wiki/Marlon_Shakespeare?oldid=141268"
Community content is available under CC-BY-SA unless otherwise noted.