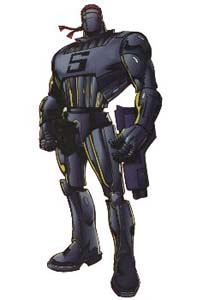 Maniac 5 is a 2000 AD strip by Mark Millar, Steve Yeowell, David Hine and Richard Elson. It features a man named Frank Bullock, whose mind is trapped inside the body of a robot, seeking revenge on the authorities who have wronged him. The series first appeared in 1993 as part of the so-called Summer Offensive. Frank hasn't been seen since 1995, but given Tharg's fondness for resurrecting old characters it would probably be unwise to write him off completely

Retrieved from "https://britishcomics.fandom.com/wiki/Maniac_5?oldid=93854"
Community content is available under CC-BY-SA unless otherwise noted.