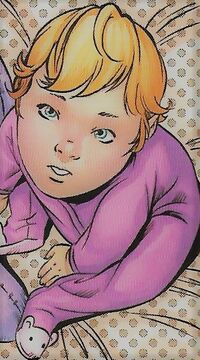 Maggie Braddock is the baby daughter of Captain Britain (Brian Braddock) and Meggan Braddock. Being the daughter of a mystically powered champion of Britain and a shapeshifter with links to the faerie realm, it was probably inevitable that she would be a gifted child, and Maggie's parents realised almost immediately that her mental development was far faster than that of a normal baby; by the age of three months, she could speak and was able to understand complex alien machinery. Unfortunately, her emotional development was not quite so swift, but Maggie is a quick learner and she has good teachers.

Though Maggie is actually a creation of Marvel US, she is included here because of her connection to the Captain Britain mythos.

Retrieved from "https://britishcomics.fandom.com/wiki/Maggie_Braddock?oldid=132862"
Community content is available under CC-BY-SA unless otherwise noted.