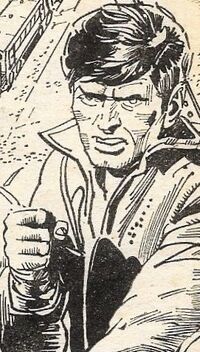 'John Probe', codename M.A.C.H. One ("Man Activated by Compu-puncture Hyperpower"), was a secret agent given superhuman strength, speed and stamina by a shadowy branch of the British government using 'Compu-puncture hyperpower', a "computerised form of acupuncture" which essentially involved sticking electrically charged needles into his skin and mapping computer circuits onto his brain.

Why this process empowered Probe instead of, say, simply killing him was never made entirely clear, but Probe and his onboard computer had a lengthy career working for the government, in this case represented by the deeply unpleasant Denis Sharpe, taking care of terrorists, spies and other threats to national security... until things started to fall apart.

Probe's first clue that the people pulling his strings were not necessarily the good guys he imagined them to be came when he encountered extraterrestrials who were terrorising a town, only to uncover evidence that the government had known about them for years and done nothing for reasons of their own.

Later, he encountered Tanya Maski, a foreign agent whose superiors had seemingly stolen the secrets of Hyperpower to transform her into a M.A.C.H. Woman, but who had defected in order to stop a lunatic scientist from transforming children into Hyperpowered zombies. Maski died thwarting the villain and destroying the stolen secrets of the M.A.C.H project, but Probe was left with the uncomfortable suspicion that Sharpe had been involved somehow in the incident and had known more of Maski than he should have.

Probe decided to investigate the M.A.C.H. project for himself, and uncovered the existence of the monstrous M.A.C.H Zero, an earlier test subject who had been transformed from a normal man into a superhumanly strong brute with the mind of a psychotic child, and then locked away out of sight as a failure. Zero broke free of his years of captivity and fought an unwilling Probe, but was seemingly killed in an explosion soon after Sharpe had promised to cure his condition (a promise which was clearly never going to be kept).

A disgusted Probe fled the service but was tracked down by Sharpe's men to a bar in New York six weeks later, his Hyperpower beginning to fail him. Showing his true, sadistic colours, Sharpe brutalised Probe, reminding him that without regular boosts of Hyperpower his altered physiology would simply burn out "and that'll be the end of John Probe."

The demoralised Probe returned to work, taking on another couple of missions, but on returning to the M.A.C.H. project found it apparently closed down and abandoned. A stunned Probe then realised, apparently for the first time, that he had no memory of his life before the project, and a trip to Somerset House provided the stunning revelation that there was no record of any such person as John Probe!

Returning to the abandoned M.A.C.H. project, Probe was confronted by Sharpe, who revealed that he had been manipulating events all along, including the theft of secrets, the creation of the M.A.C.H. Woman and the suppression of Probe's memory. Trying and failing to kill Probe using the android M.A.C.H. Two, Sharpe then decided to keep him alive after all, since Probe could not afford to harm the one man who could tell him who he really was. However, this would prove to be a fatal miscalculation on Sharpe's part.

The final chapter of John Probe's saga came with the arrival of a group of benevolent aliens stranded on Earth. Probe tried to help them; Sharpe betrayed them and attempted to steal their technology. In a final act of rebellion, Probe gave his own life to save his alien friend 'Fred', dying in a hail of bullets fired by Sharpe's men... though not before seeing Sharpe himself killed in the crossfire.

The aliens departed in peace, and a government committee assigned to investigate the incident concluded that Sharpe had been a dangerous rogue element and that Probe, or whoever he really was, had died a hero. "Only Sharpe knew the secret origin of M.A.C.H. One," declared the chairman, "and the file is now closed."

Superhuman speed (up to 120 mph); enhanced intelligence and reaction time; can hear a weak human heartbeat from a mile away.

Doesn't tend to think things through.

The notion that Probe has no memory of his past is somewhat undermined by an earlier story in which Probe attempts to help his "childhood friend," Maria. Possibly this was all a part of Sharpe's deception. (The real-world explanation is that it was a mistake caused by the strip having several writers other than Pat Mills throughout its history.)

Retrieved from "https://britishcomics.fandom.com/wiki/M.A.C.H_One?oldid=136938"
Community content is available under CC-BY-SA unless otherwise noted.