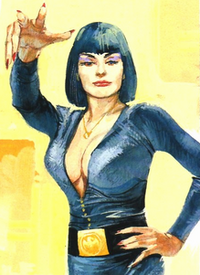 Lulu Romanov is a character from the 2000 AD strip Nikolai Dante. She was one of the daughters of Dmitri Romanov, and the half-sister of his bastard son, the adventurer Nikolai Dante. A ruthless, self-centred and deeply arrogant individual known and feared for her cruelty, and a High Priestess of the decadent Cadre Infernale, Lulu — who, like all her siblings bar Arkady, was bonded with an alien Weapons Crest — nonetheless eventually sided with Nikolai in his war against their father. In fact, she seemingly had an uncharacteristic fondness for him by that time, despite having earlier appeared to hate him. She was one of the few Romanovs to survive the final battle with Dmitri.

Retrieved from "https://britishcomics.fandom.com/wiki/Lulu_Romanov?oldid=91450"
Community content is available under CC-BY-SA unless otherwise noted.