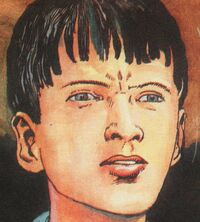 Luke Kirby is the protagonist of the 2000 AD strip The Journal of Luke Kirby. He was born in 1954. In 1962, when he was sent to stay with his mysterious Uncle Elias as his mother battled an illness at home, he discovered that he had the potential to be a great magician, heir to the Kirby Legacy.

Schooled in the arts of alchemy by Elias, Luke learned to transmute base metals, but his first real test came when he had to face alone a magical beast which had murdered his uncle's housekeeper. Killing the creature with a bullet he transmuted into silver, Luke confirmed what he had suspected all along — the beast had actually been his uncle. In killing him, Luke had freed from a curse which might now eventually pass from the uncle to his nephew. He returned home convinced that "the unlocking process which would free the beast in me had already begun. In time I would find my own apprentice and the cycle would be complete."

In his subsequent adventures Luke embarked on an odyssey of discovery as he tested the limits of own powers and learned the secrets of the magical world under the tutelage of a tramp known only as Zeke. Along the way, he first stopped an outbreak of vampirism and then travelled to the Underworld to free the soul of his deceased father.

Unspecified magical powers, including the power to conjure a magical sword out of thin air, the power to teleport over a short distance, and the ability to control the Earth's 'telluric power'.

Ambition; complacency; over-confidence (according to prog 954).

Debuting in the 1988 2000 AD series Summer Magic, Luke Kirby predates more well-known boy wizards such as Harry Potter and the DC Comics character Timothy Hunter. In fact, even Timothy Hunter predates Harry Potter, and he had glasses and an owl, too. But let's not go there...

An alchemist named Luke, who is clearly intended to be Luke Kirby, is mentioned in The Diaboliks in prog 2199. Apparently, he now spends a lot of time in the pub.