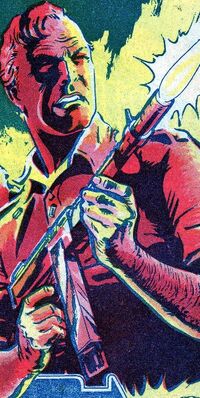 Lord Peter Flint was a minor aristocrat and sporting daredevil who became caught up in international espionage when he stumbled upon an assassination by Nazi agents while participating in a 1000 mile race in Austria shortly before the Second World War. He was persuaded by the mysterious Kingpin, a high ranking British intelligence officer, to pose as a Conscientious Objector (thereby ruining his own reputation) in order to build a cover for himself while serving his country as a secret agent, codenamed Warlord. Flint agreed and spent the rest of the war risking his life to thwart the Nazis while scorned and reviled by his friends and family. He frequently crossed swords with the German Abwehr agent Karl Schafft (the two men had a grudging mutual respect and would occasionally find reasons to cooperate with each other) and with the sadistic Gestapo agent Adolf Gruber.

Later in life, Flint became the legal guardian of the son of an old friend, who eventually grew up to become the secret agent codenamed Fireball. Flint himself maintained links with the intelligence community well into the 1970s and occasionally assisted Fireball in an advisory capacity.

By 2012, he was the commanding officer of the superhero team from The Dandy's Retro Active[1].

An older Flint would occasionally turn up in the Fireball strip in the pages of Bullet . An even older version is one of the main characters in Retro Active in the online version of The Dandy.

Retrieved from "https://britishcomics.fandom.com/wiki/Lord_Peter_Flint?oldid=53194"
Community content is available under CC-BY-SA unless otherwise noted.