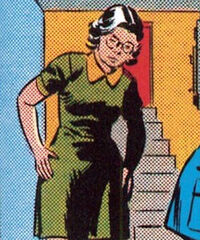 Lady Elizabeth is a character from the Marvel UK series Captain Britain. She married Doctor James Braddock after he had purchased Braddock Manor and started the construction of his computer system, Mastermind. It is unknown if Lady Elizabeth ever knew that her husband was a native of Otherworld or not.

The couple employed a woman named Emma Collins to be their housekeeper and she was also the nanny to their eldest son, Jamie Braddock. About a decade later, she gave birth to twins, Brian and Betsy.

When Brian was a student, Lady Elizabeth and her family Professor Willard Scott to dinner to try and cheer him up, but he had already decided to quit his career of teaching due to the lack of respect from his students. Professor Scott would later become known as Lord Hawk.

Lady Elizabeth Braddock and her husband were murdered by the Mastermind computer after it gained sentience. It electrocuted Dr Braddock when he was trying to repair it, and his wife died too because she was handing him a wrench at the time. The teenage Brian was out of the house when this happened because he was busy having a romantic fling with Valerie Campbell. For years afterwards he was wracked with guilt and blamed himself for his parents' death. Mastermind would use this guilt on more than one occasion as a means to attack him.

Years later Jamie would become a famous playboy, racing driver and slave owner. Brian would become a physicist and a costumed adventurer known as Captain Britain while Betsy would eventually become a world famous fashion model, adopt the nom de guerre of Psylocke, join the X-Men and have her mind implanted in the body of a Japanese ninja. This is the sort of thing that happens to people when their mothers aren't around to keep an eye on them.