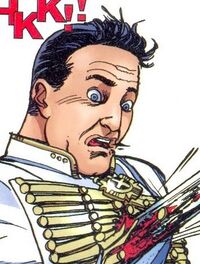 Konstantin Romanov is a character from the 2000 AD strip Nikolai Dante. He was the son of Dmitri Romanov, and shared his father's ruthlessness, as well as his disdain for the adventurer Nikolai Dante, Dmitri's illegitimate son and Konstantin's half-brother. Forced to tolerate Dante's presence as a member of the family, Konstantin made no secret of the fact that he wanted him dead, and that only the inexplicable fondness which his mother Jocasta had developed for Dmitri's bastard stayed his hand.

In the end, it was Dante who tried to kill Konstantin, stabbing him in the back during the battle of New Moscow. Konstantin secretly survived thanks to the science of Tsar Vladimir, his family's hereditary enemy, and was appointed "Lord Protector" by him, his identity hidden behind his armour and his loyalties warped by his experiences. Dante eventually learned the Lord Protector's secret and killed Konstantin in hand-to-hand combat.

In addition to wanting to kill his half-brother, Konstantin also killed his sister, Nastasia. He really wasn't very keen on his family. Oh, and his murder of Tsar Vladimir's daughter Juliana started the Civil War.

Retrieved from "https://britishcomics.fandom.com/wiki/Konstantin_Romanov?oldid=91496"
Community content is available under CC-BY-SA unless otherwise noted.