View source
watch 01:36
We're Getting Mutants in the MCU - The Loop
Do you like this video?
Play Sound
Kleggs 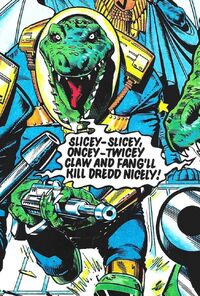 The Kleggs (who occasionally appear in their own strip, The Kleggs) are characters from 2000 AD. A race of crocodile-like alien mercenaries, they "fight for the joy of killing and take payment only in meat" (as was explained by Judge Caligula on their first appearance). This is because they are strict carnivores whose lives are dominated by eating and who tend to consume their enemies. Although they are fairly intelligent, their savagery tends to colour people's perceptions of them. They have a feudal society based in space and governed by a royal family, with only the ruling Kleggs having any form of education. When not employed as mercenaries, the Kleggs will sometimes raid other planets or spacecraft, but have little ambition beyond killing and eating.

Kleggs first came to Earth when they were hired by the insane Judge Caligula to crush resistance in Mega-City One after he had taken control of it. They entered the city in a spectacular fashion, jumping down into the streets from low-flying spacecraft and causing mass panic among the citizens gathered there to demand Cal's resignation. Cal's original plan had been to let them eat the citizens, but one of his aides pointed out that it would be dangerous to let the Kleggs get a taste for human meat. Cal instead used them to cow the citizens into submission by shooting anyone who disobeyed one of his numerous bizarre edicts. The leader of the Kleggs, Grampus (drawn by Mike McMahon with the words 'WE ARE EVIL' written on his shoulder pad) was appointed Deputy Chief Judge.

Since Cal's defeat, Kleggs have been outlawed in the city, and any citizen who sights one is duty-bound to try to kill it or report it immediately to the nearest Judge. Nonetheless, there are apparently still some Kleggs living in ruined areas of the city. They are also known to be active in other parts of the galaxy (see The Corps), and the space trucker Ace Garp and his crew were once duped into carrying a shipment of Kleggs in cryogenic stasis (until they awoke).

A blind pop star called Kyly once married a Klegg called Justin in Mega-City One as a publicity stunt. The marriage, however, was brief. Justin woke up one morning to find that he had eaten his wife in his sleep, and shortly afterwards he was shot dead by Judge Dredd.

Ripping out the throats of anyone who looks at them funny.

During the 2010 General Election campaign, the Guardian newspaper ran a light-hearted piece comparing Liberal leader Nick Clegg and his family to the Kleggs.