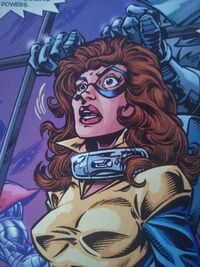 Kitty Pryde, who later adopted several aliases including Sprite and Shadowcat, was a young Jewish girl recruited to the X-Men by Charles Xavier at the age of thirteen (presumably, since the X-Men were outlaws anyway, he didn't consider child endangerment an issue). Kitty, a mutant with the power to become immaterial, quickly became a valued member of the team, and a few years later became a founding member of Excalibur. The lengthy on/off romantic relationship between her and Colossus, who can turn his body into almost indestructible 'organic steel', is proof of the old truism that opposites attract. But while friends and lovers may come and go from Kitty's life, her constant loyal companion is her pet dragon, Lockheed.

Kitty can phase through solid objects, or cause them to pass through her. This means that aside from being able to walk through walls, she also cannot be harmed by most weapons as long as she's concentrating. What she can do, however, is to grab her opponent's weapon, make it immaterial, and then rematerialise it when it is occupying the same space as their body. Ouch.

Kitty's phasing power disrupts electronic devices if she phases through them.

Lockheed (he can breathe fire).

Kitty's UK-originated appearances were mostly confined to titles such as Marvel Heroes, published by Panini.

The first appearance given is her first in a Marvel UK title.

Retrieved from "https://britishcomics.fandom.com/wiki/Kitty_Pryde?oldid=142996"
Community content is available under CC-BY-SA unless otherwise noted.