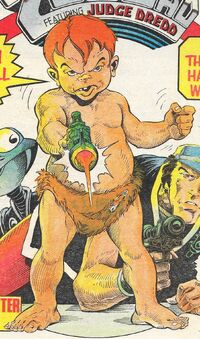 Kidd is a character from the 2000 AD strip Robo-Hunter. He was originally freelance starship pilot Captain Jim Kidd, contracted by two men named Rogers and Chan to fly Sam C Slade to the planet Verdus to discover what had become of the missing Earth colonists there. Unfortunately, Rogers and Chan had skimped on the shielding on his ship, and when it broke the light barrier both Kidd and his passenger were affected by temporal flux, effectively being de-aged by thirty years. The elderly Slade was left back in his prime, but Kidd was transformed into a one-year-old baby, albeit a mouthy one with a taste for cigars.

Kidd assisted Slade in freeing Verdus from robotic domination, though the two disliked each other intensely. The embittered Kidd, a deeply unpleasant personality, later tried to cash in on his new status by becoming a celebrity, starring in a nappy advert ("I just love a mum who buys me Comfybums!") and a top TV soap, Space Family Ogden, playing an adorable infant called 'Our Kid' who saved the family from all sorts of cosmic peril with his incredible intellect. (Standard dialogue: "We've come through the black hole alive — thanks to Our Kid's amazing grasp of quantum physics!").

He ended up with a contract out on him after making enemies of virtually everyone involved with him, including his own mother, whose head Kidd had transplanted onto the body of an gibbon when she was crushed by a truck as he was too cheap to shell out for a robotic body (see gallery). Later, Kidd became a professional Robo-Hunter, and subsequently got mixed up with the anti-robot terrorists the Human League during Brit Cit's National Song Year.

According to one account, decades later Kidd (who had not aged, for reasons he declined to go into) was eventually killed after trying to betray Slade on their return to Verdus. However, this story (in which Kidd was erroneously referred to as 'William' rather than Jim) may be apocryphal, or have been an alternate universe version of Kidd.

Kidd had the strength level of a human baby who engaged in regular moderate exercise.

Kidd's last appearance was in Mark Millar's short lived reinvention of the Robo-Hunter strip in the 1990s. Its relationship to the ongoing continuity of the character and the series is uncertain.

Retrieved from "https://britishcomics.fandom.com/wiki/Kidd?oldid=62562"
Community content is available under CC-BY-SA unless otherwise noted.