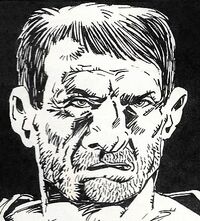 Jupe was one of an incredibly tough race genetically engineered for life under the heavy gravity of the moons of Jupiter. In 2531 AD he was also the sergeant of the V.C.s or 'vacuum cleaners', a squad of space commandos helping to rid the universe of the hostile alien Geeks. The rest of the V.C.s were Crick (who died), Steve Smith (who replaced him), Hen-Sho, Loon, Ringer and Dwarf Star. Jupe was a strict but fair officer, who did his best to integrate the rookie Smith with the rest of the crew.

During a mission to rescue some rookies besieged by Geeks on an alien planet, Jupe was blinded by the light of twin suns. Despite this impairment, Jupe eventually helped Smith to end the war by destroying the Geek High Command.

The Dishwasher, a treacherous member of the diplomatic corps, had left a recording in his signet ring before his death denouncing Smith. Just as the other diplomats were about to play it, Jupe grabbed a piece of domestic equipment being used to prepare the area for its prestigious guests and sprang to the rescue: "Hell, I've accidentally switched on one of the carpet cleaners! Where am I going?" Smith's career, and possibly his life, were saved when Jupe sucked the incriminating recording into... a space-age vacuum cleaner.

Jupe (with new engrafted eyes) and Smith were participating in a celebratory fly-past marking fifty years of interstellar peace in 2581 AD when the Geeks mounted a surprise attack. The veterans' ship landed on the Moon, and Jupe and Smith lost no time suiting up, grabbing weapons and running to the rescue of some beleaguered humans. Old habits, like old soldiers, die hard.

Like Smith, Jupe was chosen to lead a squad of space commandos in the second Geek war, and occasionally met Smith on Mars for a drink. In their last drinking session Smith, who had had a dream of Jupe's death, warned him to be careful but Jupe made light of his fears.

Their next encounter was when Jupe sent out a distress call from a mining platform orbiting Pluto that was crawling with Geeks. Smith knew that Jupe, whose mantra was "You're hit, you're dead," would not ask to be rescued unless there was something bigger at stake. The new V.C.s retrieved Jupe, who had with him a data-log full of info about a new Geek weapon "big enough to spit out meteors the size of Africa." Their ship then crashed on Charon.

Jupe had been fatally injured while on the mining platform and knew that he was a dead man walking, kept alive only by powerful drugs. He spent the last of his energy helping Keege to rescue Smith from Geek captivity, and laid down his life providing covering fire to allow the pair to escape.

Retrieved from "https://britishcomics.fandom.com/wiki/Jupe?oldid=84370"
Community content is available under CC-BY-SA unless otherwise noted.