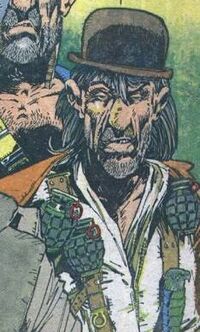 Junior, who referred to himself as "Hell's Angel" and "the baddest man who ever lived" (protesting too much?) was the youngest and most vicious of the Angel Gang, a family of criminals who preyed on travellers in the Cursed Earth. He fled Earth along with his family in order to escape the law but was pursued to the planet Xanadu by Judge Dredd, who apparently killed not only Junior and his Pa (who fell into a volcano) but also Junior's brother Mean. Junior's other brother, Link, was accidentally killed by Mean, who had a tendency to go into uncontrollable rages thanks to some brain surgery his father performed on him when he was a teenager to heighten his aggression. Mean was later resurrected by the Judge Child, because the writers thought he was too entertaining a character to go to waste. Junior stayed dead, because 'constantly proclaiming how darned evil you are' isn't the same thing as 'being an interesting and readable character'.

Years later, it was revealed that Pa and Junior had been rescued from the volcano somehow and survived in suspended animation. They challenged Dredd again for revenge, but have not been seen since.

A variety of guns and knives.

Junior was played in the 1995 Judge Dredd movie by Ewen Bremner.

Retrieved from "https://britishcomics.fandom.com/wiki/Junior_Angel?oldid=88769"
Community content is available under CC-BY-SA unless otherwise noted.