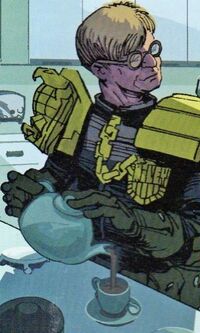 Judge Smiley has apparently been active in Mega-City One for decades, but he was first introduced to readers in the three-way crossover Trifecta. A mild-mannered man with an innocuous appearance, Smiley was appointed the head of Justice Department's Black Ops unit by Chief Judge Griffin in 2101 after the defeat of Judge Caligula, his main responsibility being to prevent such corruption ever occurring again. He was indirectly responsible for driving Judge Frank insane, transforming him into Dirty Frank and transferring him to the undercover division known as the Wally Squad because he "needed a man" in the division. He also recruited Miss Anne Thropé and used her to manipulate undercover Judge Jack Point.

Smiley disappeared during the city's 'Judgement Day' in 2114, presumed eaten by zombies. Chief Judge McGruder replaced him with Judge Carolyn Bachmann. Smiley had actually survived the zombie uprising and concealed himself in a secret labyrinth of hidden rooms within the walls of Justice Department. He continued to watch and manipulate unseen and unsuspected until Bachmann, who ultimately turned out to be just the kind of threat Smiley had been put in place to combat, attempted to replace Mega-City One with her very own godcity. She was aided by Archmime Turner of the Church of Simpology and the shark-man Enormo Overdrive, CEO of Overdrive Inc.

Smiley then set into motion a plan to thwart Bachmann's plot, using Judge Dredd and a brainwashed Jack Point and Dirty Frank as unwitting agents. He could have stopped it earlier, before quite a few people were killed, but because he is one of those scary people who act for the greater good (like Bachmann) he waited until Bachmann's treachery was obvious before calling a halt to the godcity's march.

Finally, Smiley emerged from hiding just in time to kill Bachmann. Chief Judge Hershey was horrified and angered to learn that Smiley had been hiding just inches from her office for years, and that Dredd had not trusted her to know what was going on. As Smiley went back into hiding, she remarked that they might have "swapped one problem for another."

Dredd later uncovered evidence that Smiley had been manipulating events in the city on a grand scale for longer than previously suspected, and had allowed the Apocalypse War to happen when he could have prevented it, in order to cull the city's unsustainable population growth. Dredd executed Smiley for his crimes, though not before his ally Judge Sam had died as a result of Smiley's machinations, and Dirty Frank had killed himself in order to escape his control.

Cunning and manipulative; has access to impressive quantities of money.

Teapot; porcelain crockery; silver teaspoon; biscuits containing robots that hide in people's molars until the time comes for them to broadcast a codeword to wake people up from hypnosis-induced amnesia.

He doesn't need any. He prefers to sit still and move the world around him.

Judge Smiley professes an interest in "classical music," including the song 'Birdhouse in Your Soul' by the group They Might Be Giants. (There is, in fact, only one Giant in Justice Department.)