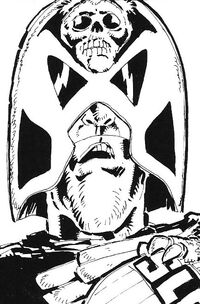 Judge Slocum is a character from the 2000 AD strip Judge Dredd. He was a Judge loyal to the insane Chief Judge Cal and was first seen saving two other Judges, Percy and Glass, from being killed by Cal for letting Judge Dredd and Judge Giant escape. Slocum instructed the Judges, who were both male, to appear in front Cal wearing knee-length dresses. He then claimed that Judge Fish, Cal's pet goldfish whom he had appointed Deputy Chief Judge, had told them to dress that way as their punishment. Rather than contradict Judge Fish, Cal let the men live in their strange new attire, which made them look a bit like milkmaids.

Cal trusted Judge Slocum, who was often at his side in the Grand Hall of Justice. This enabled Slocum to make some key decisions which stopped the entire city from perishing. Firstly, he pointed out to Cal that if his alien mercenaries, the Kleggs, were allowed to eat all of the citizens then they might grow to like the taste of humans and start eating the Judges as well. Then Judge Dredd briefly kidnapped Slocum after Cal had sentenced the entire city to death, and gave him instructions about how to stop the slaughter. Slocum obeyed him by killing Judge Fish, before telling the superstitious Cal that his finny friend had died of natural causes at the same time as the first citizen, Aaron A. Aardvark, was executed. Cal believed Slocum when he said that it was an omen: "If the people die, so do the Judges!"1 Instead, he decided to let the citizens live... and then, when none of them came to Judge Fish's funeral, decided that this had been the right decision, as now he could make them all suffer! As part of this plan, Slocum was instructed to use the citizens as slave labour to build a huge wall around the city which would stop them escaping into the Cursed Earth. Despite the attempts of Dredd and the anti-Cal resistance to sabotage the wall's construction, it was finished in three weeks, just as Cal had commanded.

Dredd and the anti-Cal resistance were tracked down by the Kleggs, tried to escape in a roadliner, were pursued by Cal, Slocum and the rest of Cal's entourage, and ended up crashing into the undercity. Cal assumed that they were dead and composed some awful 'poetry' to celebrate their demise, which Slocum had to pretend he thought was a work of genius. Cal then legalised crime, became enraged when the citizens were too afraid to commit any, and cheered himself up by ordering Judge Cox to commit suicide as proof of his love for him. Slocum came to the sickening realisation that the city was being governed by a homicidal despot who could have any of them killed on a whim, and that he had just helped to get rid of the only man who could have stopped him.

Slocum had told Judges Percy and Glass that they should never question Cal's sanity. He nonetheless went on to ignore his own advice and commit the grave mistake of criticising his Chief's decision to make Walter the Wobot a Judge, inadvertently suggesting in passing that Cal was 'crazy'. He hastily tried to cover up his error by saying that he was just worried about Cal, but it was too late. Unfortunately for Slocum, Cal was indeed crazy. He had Slocum injected with a paralysing agent, forced his face into a rictus grin and then pickled him in a huge jar of vinegar for his gaffe, so that he wouldn't worry any more and his face would be free from wrinkles. This was also unfortunate for Cal, as it turned out, since just before Slocum was paralysed he had been about to warn him that Walter was secretly working for Judge Dredd, who had been alive all along.

Dredd eventually saved the city from Cal, but this came too late for Slocum. Presumably his body is now floating in its giant specimen bottle somewhere in the Black Museum.

Tends to speak before he thinks when under stress.

Like many of Cal's other followers, including Judge Quincy, Slocum was a member of the S.J.S.

Retrieved from "https://britishcomics.fandom.com/wiki/Judge_Slocum?oldid=137933"
Community content is available under CC-BY-SA unless otherwise noted.