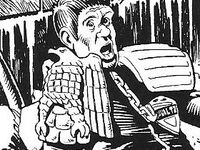 Judge Schmaltz is a character from the 2000 AD strip Judge Dredd. He was one of the few Judges who remained loyal to Judge Dredd when the insane Judge Caligula took over Mega-City One. This was because was a Judge-Tutor at the Academy of Law, and therefore didn't have to listen to the daily crime briefings that Cal used to brainwash the rest of the Judges. Schmaltz's loyalty in part compensated for the fact that he was a deeply boring and mawkishly sentimental man. He was mortally wounded when the resistance fled to the undercity, and took an irritatingly long time to die.

Schmaltz's corpse was placed in the cab of the roadliner in which the resistance had entered the undercity, set alight and pushed off into the hideously polluted Ohio river, now known as the 'Big Smelly'.

Teaching; seems to have some medical knowledge (he said that one of the Judges injured in the fight against Cal wouldn't last the night).

Human male who is either too old or too injured to be no use as a street Judge.

Retrieved from "https://britishcomics.fandom.com/wiki/Judge_Schmaltz?oldid=137943"
Community content is available under CC-BY-SA unless otherwise noted.