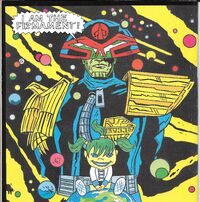 Billy Planet was, according to Judge Joseph Dredd, a former Judge who volunteered for a ridiculously dangerous early experiment to send a human soul on an exploratory journey into space using the device called the Soul Gun. When the Soul Gun accidentally exploded, killing Billy's body, it was assumed that his soul had also been destroyed or lost forever, but instead Billy's fractured consciousness began attracting material from space, mostly asteroids, with which to build a new body. Unfortunately, in space he had no sense of scale, so his new body was huge: in fact, planet-sized!

This meant that when Billy began making his way back to Earth, he threatened to cause total devastation. Dredd averted the catastrophe by discovering the one true love of Billy Planet's life, an incontinent doll called Betsy Wetsy which Planet had owned as a child, and having a huge (moon-sized) facsimile of it built and sent into space. Reunited with Betsy, Judge Planet drifted away into the deep cold heart of infinity with his bride...

A few sandwiches short of a picnic.

There are a number of issues with the Judge Planet story in terms of its place in the Judge Dredd universe. Neither the Soul Gun nor the abortive space program have ever been mentioned before or since, and while Dredd claims to have known Billy Planet when he graduated from the Academy, we later learn that Billy's father took the Betsy Wetsy doll from him when he was fourteen years old, logically not possible given that cadet Judges are recruited to the Academy when aged five. Dredd also behaves in a way entirely at odds with his established character, at one point calling Planet's mother a "mad old cow." On the whole, it's probably best to assume that the story, and Judge Planet, are not actually a part of the Dredd canon at all.

Retrieved from "https://britishcomics.fandom.com/wiki/Judge_Planet?oldid=90158"
Community content is available under CC-BY-SA unless otherwise noted.