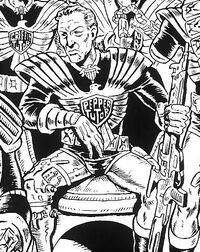 Judge Pepper was a character in the 2000 AD series Judge Dredd. A former street Judge in Mega-City One who had suffered crippling injuries in the line of duty (he lost his right leg), he had been reassigned to teaching at the Academy of Law, where his students included both Judge Joseph Dredd and the ambitious Judge Caligula. Judging by the fact that he chose to teach the next generation of Judges rather than take the Long Walk into the Cursed Earth or the undercity, Pepper seems to have had a strong allegiance to the Justice Department and a desire to shape the city's future.

When Cal went insane, became Chief Judge and took over the city, Pepper was, along with fellow teacher Judge Griffin, one of the small squad of rebels who aided Dredd in overthrowing him. The rebels comprised Judges who hadn't been affected by the subliminal brainwashing messages that Cal had planted in the daily crime briefings: tutors from the Academy of Law, who did not attend such briefings, plus Judge Giant, who had been on a month's leave. Pepper helped Dredd to raid a judicial armoury, but was then knocked down by one of the army of Kleggs that unexpectedly rained down on the city — reinforcements called in by Cal. The rebels had to beat a hasty retreat. Dredd refused to leave Pepper behind, and single-handedly lifted him onto the back of his Lawmaster.

Dredd's rebels carried out guerrilla warfare against Cal's regime, but when their hideout was located they were forced to flee from Cal in a roadliner which then crashed into the Big Smelly (the hideously polluted, concreted-over Ohio River), leaving everyone to assume that the rebels were dead. Fortunately for Pepper, he was one of the men who had been sitting in the roadliner's crash-proof command capsule. His life and that of Judges Griffin, Dredd and Giant were saved by airbags which inflated at the moment of impact.

The anti-Cal resistance found shelter in the undercity (the remains of the old twenty-first century cities over which Mega-City One had been built) in the den of Fergee, an eccentric fugitive from the law whose allegiance Dredd won after beating him in unarmed combat. In the days they spent in his filthy lair, which was fortunately full of stolen goods, Pepper cobbled together a new briefing tape to play to the brainwashed Judges. When they heard that Cal planned to murder the entire population with nerve gas, the rebels crept back up to the city and into the Grand Hall of Justice, and inserted Pepper's tape into the machine used to play the daily crime briefing. The effect was dramatic: all the Judges suddenly realised that they had been Cal's mindless puppets, and turned against him. Cal himself was killed by Fergee, who jumped off the Statue of Judgement with him in his arms, thus showing that he was brave and altruistic and refuting Pepper's analysis of him as a "blasted halfwit."

After Cal's defeat Griffin became the new Chief Judge, with Pepper as Deputy Chief Judge. Sadly, Pepper was later killed by the Lupins, a couple who wanted to become contestants on a game show where people confessed to crimes to win prizes.

Permanently legless (however, his artificial leg can deliver a kick strong enough to incapacitate a fully-armed Judge).

Retrieved from "https://britishcomics.fandom.com/wiki/Judge_Pepper?oldid=95818"
Community content is available under CC-BY-SA unless otherwise noted.