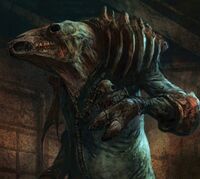 The foetid, unwholesome entity who adopted the name Judge Mortis was once a human who lived on the parallel world that came to be known as 'Deadworld'. As a child, he enjoyed spending time in cemeteries, and considered the dead to be his friends. As an adult, he became a Judge in his world's fascist police force before having himself transformed by the Sisters of Death's black magic into his current undead form. This enabled him become one of Judge Death's Dark Judges, alongside Judge Fire and Judge Fear.

In the early stages of his metamorphosis Mortis resembled a human gradually changing into a putrid, decaying animal. Then he went on a mission into orbit, was exposed to the vacuum of space and had the flesh ripped from his head, leaving him with only a bestial skull.

During the fall of Deadworld, Mortis, who seems to have been a bit of a science geek, took over his country's environmental control, using it to introduce dead fluids into the food and water supplies, and to create destructive weather events. He also distilled dead fluids into an unstable, super-heavy solid to make a 'dead matter bomb' he used to destroy Megagrad, capital of the Sov Federation.

Since crossing the dimensional barrier to the universe inhabited by Judge Dredd, the Dark Judges have clashed repeatedly with both Dredd and Psi-Judge Anderson — most notably during the Necropolis incident. Judge Fear was eventually apprehended by Justice Department. The remaining three Dark Judges were last seen wreaking havoc on one of Mega-City One's colony worlds in the series Dominion.

In the Dreams of Deadworld series by Kek-W and Dave Kendall, Judge Mortis' hobbies were shown to be gardening and wine-making. (You don't want to see his garden, and you seriously don't want to drink his wine.) His most prized possession is a gold pocket watch bearing the inscription 'With love forever J'.

Judge Mortis is a disembodied spirit who gains corporeal form by possessing the bodies of others using chemicals called 'dead fluids', a process which kills the host body.

Judge Mortis can be temporarily incapacitated by a hi-ex bullet (as demonstrated by then-cadet Giant in 2000 AD prog 689).

'Mortis' is Latin for 'death'.

Retrieved from "https://britishcomics.fandom.com/wiki/Judge_Mortis?oldid=144197"
Community content is available under CC-BY-SA unless otherwise noted.