View source
watch 01:36
We're Getting Mutants in the MCU - The Loop
Do you like this video?
Play Sound
Judge Dredd 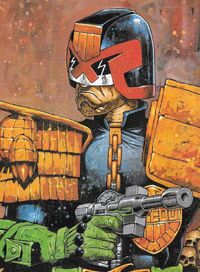 The eponymous hero of Judge Dredd, the most famous of 2000 AD's strips (and also a strip in the Judge Dredd Megazine), was 'born' in Mega-City One in 2066 AD. Joseph Dredd was the clone of Chief Judge Fargo, the founder of the Judge system. Like his clone brother Rico, he was created in a laboratory, grown in a tank, effectively 'born' aged five years old (thanks to accelerated ageing techniques) and immediately inducted into the Academy of Law. Joe and Rico were inseparable during their childhood and youth, the connection caused by their identical DNA being so strong that Joe could sometimes feel what his brother was feeling. (He didn't realise that that was what had been happening until much later, but it raises the intriguing possibility that 'Ol' Stoney-Face' has during his life experienced lust or love vicariously, through the genes he shares with the Fargo clones Rico, Rico Dredd and Dolman.)

The brothers helped maintain order during President Robert L. Booth's atomic war while still cadets, and also met their 'father' Fargo during this period. They graduated the Academy in 2079 (Joe graduated second in his class; Rico was first), but Joe was forced to arrest his brother for murder and corruption shortly afterwards. Rico was sentenced to the Judges' penal colony on Titan, while Joe Dredd became known as the most respected and feared of the street Judges, his name synonymous with the law in Mega-City One. Rico later returned for revenge, and Dredd was forced to kill him. Dredd nevertheless maintains a frigid but quasi-paternal attachment to Rico's daughter, Vienna. His attitude towards family relations has softened over the years, partly because of his realisation that he should have taken more of an interest in another of his clone brothers, the mentally impaired Nimrod.

Dredd has been instrumental in saving the city many times over the decades, facing foes such as the extradimensional superfiend Judge Death, the Fink, the Mean Machine and the rest of the notorious Angel Gang, and the serial killer PJ Maybe, and meeting bizarre characters like Otto Sump, Max Normal, Chopper, Toots Milloy and Dave the Orangutan among many others. He led the rebellion against the insane Chief Judge Cal, defeated the robot revolutionary Call-Me-Kenneth and deposed the corrupt Chief Judge Sinfield. He also embarked upon the Cursed Earth saga, stopped The Apocalypse War (by killing the 500 million citizens of East-Meg One with nukes), undertook The Judge Child Quest, helped to save the world from zombies during Judgement Day and was one of the leading characters in Trifecta.

Dredd has now been active as a Judge for over fifty years and was once elevated to a position on the City's ruling Council of Five, although he does not currently sit there. He has repeatedly turned down attempts to appoint him Chief Judge as he believes he belongs on the streets, dispensing justice. One of his finest moments was when he threatened to resign if Chief Judge Hershey didn't push through a law giving mutants equal rights. Unfortunately this ended with Hershey losing an election to the anti-mutant Chief Judge Dan Francisco, who was then succeeded by corrupt Acting Chief Judge Martin Sinfield. Dredd eventually uncovered Sinfield's crimes, allowing Francisco to take office once more. It is arguable that although Dredd had the right idea in wanting equal rights for mutants, he implemented it in a catastrophically inept way that made the entire situation a lot worse.

Hershey replaced Francisco after Chaos Day, a devastating attack on Mega-City One by the Sovs in 2134 AD which killed 350 million of the city's then 400 million citizens. The attack was intended as a reprisal for Dredd's killing of half a billion Sovs during the Apocalypse War.

In 2138 AD, following an incident when he nearly died in the Cursed Earth because of the machinations of Judges from Brit-Cit and Texas City, Dredd underwent rejuvenation treatment. According to a Med Judge, the clinic he attended "completely restructured your entire epidermis, vascular system and muscular tissue at a cellular level." Dredd refused to have his bones and organs rejuvenated as well, either because it would have taken longer or for some other reason.

Dredd is double zero rated for psychic sensitivity. This negative power gives him enhanced resistance to some types of psychic attack (see his encounter with Judge Fear).

Mega-City One's best Judge; bionic eyes give him enhanced clarity over distance and 20-20 night vision; is phenomenally resilient; can legally unite two or more other people in wedlock.

Dredd's eyes are bionic implants which can be rendered useless by an electromagnetic pulse. He lost his natural eyes some years ago fighting "some lizard monstrosity in a future that will never happen" (Rob Williams).

Lawmaster bike. Has also been known to ride the horse Henry Ford, another black horse (this one with no name) and an elk.