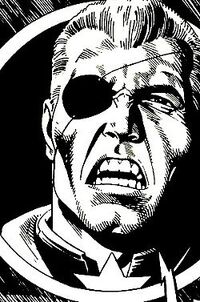 Judge Griffin, a supporting character from the 2000 AD strip Judge Dredd, was the Principal of the Academy of Law in Mega-City One (and trained several generations of Judges, including Dredd) until he was pressed back into service during the fight against the insane Judge Caligula. Following Cal's death in 2101 AD, Griffin was nominated for the position of Chief Judge by Dredd himself, and proved a capable and just leader, with Judge Pepper (who had fought Cal alongside him) as his deputy. It was he who sent Dredd, Larter, Hershey and Lopez on the Judge Child Quest, leading to the elimination of one of the city's greatest enemies.

During the Apocalypse War of 2104 AD Griffin sustained head injuries and was sent into space for his own protection. His spaceship, Justice Two, was boarded by troops from the Sov city of East-Meg One who captured him before he could kill himself. Griffin was then brainwashed by Sov "psycho surgeons" and transformed into an enthusiastic pro-Sov cheerleader. To prevent him from being used as a propaganda tool against his own city Dredd was forced to assassinate him during a television show hosted by East-Meg presenter Mikhael Parkinov, though Griffin managed to fight off the brainwashing and admit his 'treachery' live on air before dying.

He was succeeded as Chief Judge by Judge McGruder.

Griffin had only one eye, which lessened his effectiveness in combat situations slightly.

Griffin's face appears on the one hundred cred bank note.

Retrieved from "https://britishcomics.fandom.com/wiki/Judge_Griffin?oldid=90130"
Community content is available under CC-BY-SA unless otherwise noted.