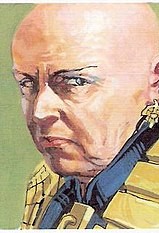 Judge Jura Edgar was the head of Justice Department's Public Surveillance Unit in Mega-City One from 2100 to 2122, a position she was appointed to after losing the use of her legs while on active street duty. Ruthless and uncompromising, her name, her attitude and her use of an antigravity wheelchair earned her the disparaging nickname "J. Edgar Hover", due to comparisons with the legendary FBI Director J. Edgar Hoover. Edgar was not above using her position to gain influence or to discredit other Judges, and she was responsible for the investigation which led to Galen DeMarco's resignation, an investigation she began purely to irritate her old adversary Judge Dredd. Unknown to Justice Department, she was also a part of a secret group of vigilante Judges called "The Citizens' Court", who committed several murders; after seventeen such killings, she disbanded the group to protect hersef.

Discovered to be secretly holding potentially incriminating evidence on senior Judges, Edgar was investigated by the Special Judicial Squad in 2122. Escaping criminal charges, she was nonetheless removed from her position and replaced by Judge Niles, who had led the investigation against her. Edgar was demoted to running a prison camp in the Cursed Earth, where she remained for the next eight years. In 2130, while dying of cancer, Edgar pointed Dredd towards the survivors of the Citizens Court group as part of an elaborate revenge scheme, hoping he would be killed by them. Dredd administered judgement to the group, but Edgar died before he could arrest her for her part in the killings.

Retrieved from "https://britishcomics.fandom.com/wiki/Judge_Edgar?oldid=98787"
Community content is available under CC-BY-SA unless otherwise noted.