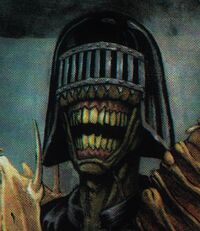 Judge Death is a character from the 2000 AD strip Judge Dredd who occasionally has his own strip, Judge Death, in 2000 AD and the Judge Dredd Megazine. Born on a parallel Earth, Sidney De'Ath was a sadist who joined the Judges purely to indulge his obsession with killing. His father was a dentist who used to torture his patients and then started murdering them, explaining to his son that "their brains are full of worms." Sidney ratted him out to the Judges and was allowed to execute him as a special treat. The dentist's last words were, "Good boy."

Sidney's hard-line stance against lawbreakers earned him the nickname 'Judge Death', which he adopted as his own. After graduating from Law School he hunted down his mother and sister so he could kill them, and then had a happy career executing citizens for crimes such as untied shoelaces. Encountering the witches Phobia and Nausea, the Sisters of Death, he and three of his fellow Judges had themselves transformed by black magic into the four Dark Judges. Death became the leader of Judge Fear, Judge Fire and Judge Mortis.

The Dark Judges reasoned that all crime was committed by the living and that therefore, life itself should be a crime; they duly passed sentence on every living thing on their world, which they renamed 'Deadworld'.

In 2102, Death managed to cross over into the dimension where Judge Dredd's Mega-City One existed, and massacred the citizenry until he was stopped by the sacrifice of Psi-Judge Anderson, a psychic who effectively trapped his spirit form in her own body and was then voluntarily encased in the impenetrable miracle plastic called Boing® in a state of suspended animation.

He (and therefore Anderson, too) was eventually released by the Dark Judges, who had followed him. Death and the Dark Judges have since attacked Mega-City One several times both together and separately, on one occasion effectively conquering the city for a time with the aid of the Sisters of Death during the Necropolis incident.

After Necropolis, Judge Death told his life story to a journalist, Brian Skuter, because he was annoyed that the citizens didn't appreciate the 'gift' he was offering them and he wanted to set the record straight. Unfortunately for him, his story was published as a sensationalist trivia piece in a low-grade rag, ensuring that nobody would take it seriously, and Justice Department stopped any more of the late Skuter's records being released.

Following this disappointment, Judge Death embarked on a trek through the Cursed Earth, and decided during his journey that he needed some weapons of mass destruction in order to carry out his mission properly. He found an old Bush class missile silo and used the nukes in it to destroy Las Vegas. Judge Death was then attacked by the vengeful spirits of all those he had killed, led by the lone ranger Hocus Ritter, and his spirit dragged down to Hell. However, he later returned to plague Mega-City One again, and was last seen wreaking havoc on one of their colony worlds in the series Dominion. You cannot kill what doessss not live!

Judge Death is a disembodied spirit who gains corporeal form by possessing the bodies of others using chemicals called 'dead fluids', a process which kills his host. (These fluids are easily obtained by Judge Death whenever the plot demands it, suggesting — rather disturbingly — that they may be common household liquids such as vinegar and fabric softener.) He can kill with a touch, his signature method being to plunge his hand into his victim's chest in a phased state and then solidify it, stopping the heart.

Judge Death is a surprisingly polite being of pure evil, who has a habit of knocking on citizens' doors before popping his head into the room and uttering a cheerful "Greetingssss!" Sadly, his victims invariably fail to appreciate his good manners.

For a time, Death lived in Mega-City One using the boarding house owned by the almost completely blind Mrs. Gunderson as a base. Mrs Gunderson never realized that that nice Mr De'ath was actually Judge Death!